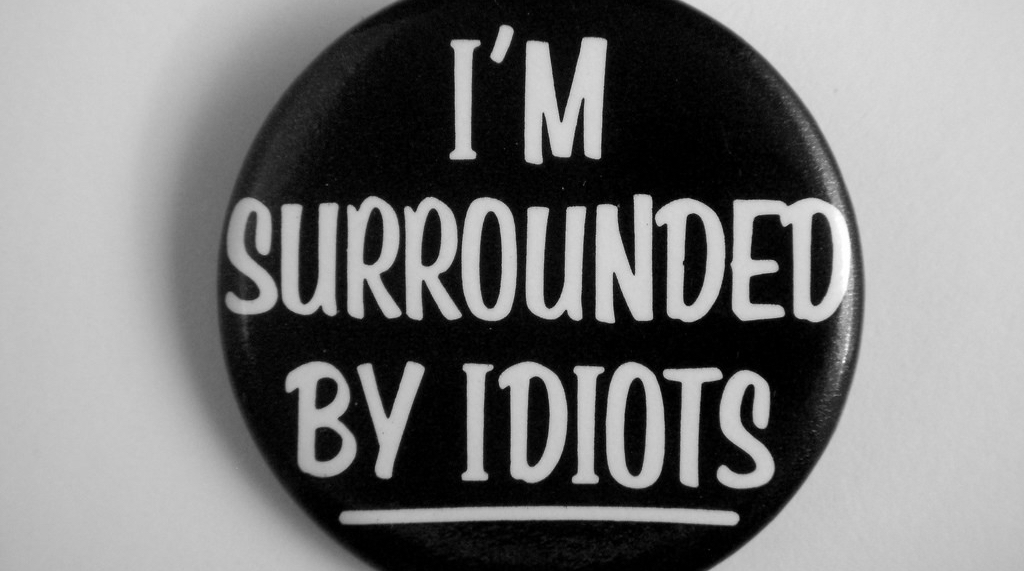 We have a problem: There are way too many idiots in the world. And because they’re idiots, they have no idea that they’re idiots. And therein lies the rub. Have you ever tried to get an idiot to realize it? It’s way harder than you’d think. The problem is that idiots have powerful defenses against that sort of thing. That’s what makes them idiots.

My wife is a perpetual student. She attended a culinary academy ages ago, but continues to take classes. Why, I don’t know. Most of the students are half her age and clueless. Don’t get me wrong; we were all young and dumb once. But far too many of these snowflakes are arrogant, annoying, controlling little shits.

My wife witnessed one such know-it-all authoritatively showing another student how to mince garlic, except she was slicing and dicing the little bulb like it was an onion. With all the humility she could muster, my wife kindly demonstrated how chefs in the real world do it: crushing the bulb with the flat blade of a knife and then finely mincing it. Easy.

The snowflake said, “That’s not how I do it …” and continued her exercise in futility with her sheeple student following right along. My wife just rolled her eyes and went back to what she was doing.

Those idiots will probably never learn a thing. Why would they? Why should they? They already know better.

That sort of thing happens all the time.

The other day I got an email from a young guy who apparently bought my book, Real Leaders Don’t Follow (shameless plug), and got all the way to page 18 before coming across something so wrong that he just had to set me straight.

One of the book’s key tenets is that the internet is a ginormous echo chamber for boneheaded fads and scams that have the masses bamboozled on everything from positive psychology to a link between vaccines and autism, a claim based on research that was discredited as a deliberate fraud by a jerk named Andrew Wakefield.

This reader “guaranteed” that there’s a link, and suggested I “begin the journey of finding the truth” by watching a documentary he said “will open your eyes and your consciousness to a world that you didn’t even know existed.” The documentary he referred to was made by, wait for it, Wakefield.

Just to be clear folks, this is a pretty big deal. I replied to the reader that Wakefield’s scam “led to a significant decline in the use of life-saving vaccines and the preventable deaths of thousands of children every year,” I said, “In my opinion, he’s a serial murderer who belongs behind bars.” And I encouraged the young man to please vaccinate his children, if and when he has any.

“I don’t have children. But when I do, they will not be vaccinated,” he replied, “P.S. I stopped reading your book on page 18 yesterday. Sold it on Amazon today.”

Lack of common sense doesn’t make people idiots. Neither does ignorance, being wrong, or even being wrong a lot. What makes people idiots is being so arrogant as to think they’re more knowledgeable than everyone else when they’re actually clueless. That’s what compels idiots to push their idiot nonsense on others.

If you really want to change the world, here’s what you can do: See if you can get all the idiots to Google “critical thinking.” If you could do that, you’d be famous. Your name would be enshrined right up there with Jobs, Gates, and Zuckerberg as the genius who figured out how to get idiots to question their own idiocy. You’d be the guy who solved the world’s idiot problem.