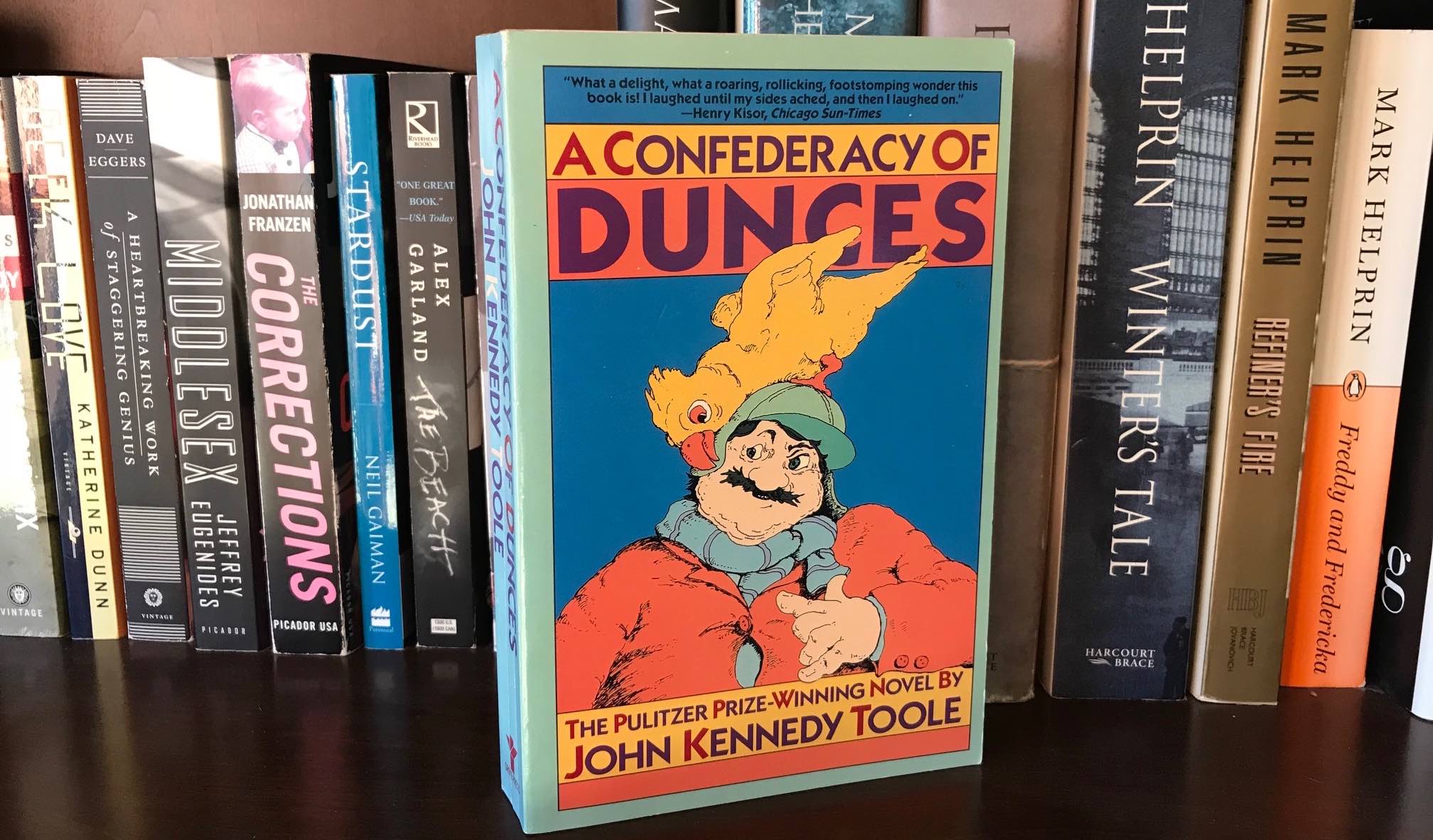 “You don’t need no gypsy to tell you why, ya can’t let one precious day to slip by.” – Gregg Allman

Sometimes I hit a book store, pick up whatever looks intriguing, and give it a whirl. Those experimental phases have yielded some pretty incredible discoveries, including A Confederacy of Dunces by John Kennedy Toole. Easily one of the greatest novels I’ve ever read, it’s also probably the funniest. Which makes the backstory on the book and its author unspeakably tragic.

Toole was a brilliant writer and beloved professor, but he also had psychological issues. It certainly didn’t help that his life’s work – the manuscript he put so much of himself into – was consistently rejected by publishers. He even spent years trying to rework it to the liking of Simon & Schuster’s famed editor, Robert Gottlieb, to no avail.

In 1969, Toole ran a garden hose from his car’s exhaust pipe in through the window. He was 31 when he died. His mother spent years continuing to shop the manuscript, only to meet with the same depressing rejection her son had. As a last-ditch effort, she literally forced her way into a meeting with author Walker Percy, who was teaching at nearby Loyola University in New Orleans.

Percy started reading the manuscript, assuming it would be crap and he could quickly get this crazy woman out of his hair. But with each page, he liked it more and more. Unable to put it down, he finally concluded that it was a brilliant work.

Three years later, Percy finally succeeded in getting the original manuscript published by Louisiana State University. The first printing was a modest 2,500 copies. The following year – 11 years after his suicide – Toole won the Pulitzer Prize in fiction. It has since sold more than 1.5 million copies worldwide.

Toole isn’t the first person whose brilliance was recognized posthumously, and he certainly won’t be the last. More important, I can name dozens of creative geniuses – artists, musicians, authors, scientists, actors, CEOs – who suffered from depression or some other debilitating illness and died long before their time.

Two of the greatest guitarists who ever lived, Jimi Hendrix and Duane Allman, both died tragically in their 20s. While Hendrix’s death was caused by asphyxiation from an overdose of barbiturates, Allman died following a motorcycle accident. Sometimes, tragedy is just bad luck.

Soon after his brother’s death, Gregg Allman wrote “Ain’t Wastin’ Time No More.” The ballad, which appeared on the Allman Brothers Band’s 1972 Eat a Peach album, describes Gregg’s confrontation with mortality – not just his brother’s, but his own. Strangely enough, the song strikes an optimistic tone.

Last Sunday morning, the sunshine felt like rain.
The week before, they all seemed the same.
With the help of God and true friends, I’ve come to realize,
I still have two strong legs, and even wings to fly.

So I, ain’t wastin time no more.
Cause time goes by like hurricanes, and faster things.

Well, Lord, Lord, Miss Sally, why all your cryin’?
Been around here three long days, lookin’ like we’re dyin’.
Go step yourself outside, and look up at the stars above,
And go on downtown, baby, find somebody to love.

Meanwhile, I ain’t wastin’ time no more.
Cause time goes by like pouring rain, and much faster things.

You don’t need no gypsy to tell you why,
Ya can’t let one precious day to slip by.
Well, look inside yourself, and if you don’t see what you want,
Maybe sometimes then ya don’t,
But, leave your mind alone and just get high.

Well, by and by, way after many years have gone,
And all the war freaks die off, leavin’ us alone.
We’ll raise our children, in the peaceful way we can,
It’s up to you and me brother,
To try and try again.

So, hear us now, we ain’t wastin’ time no more.
Cause time rolls by like hurricanes.
Runnin’ after the subway train.
Don’t forget the pourin’ rain. 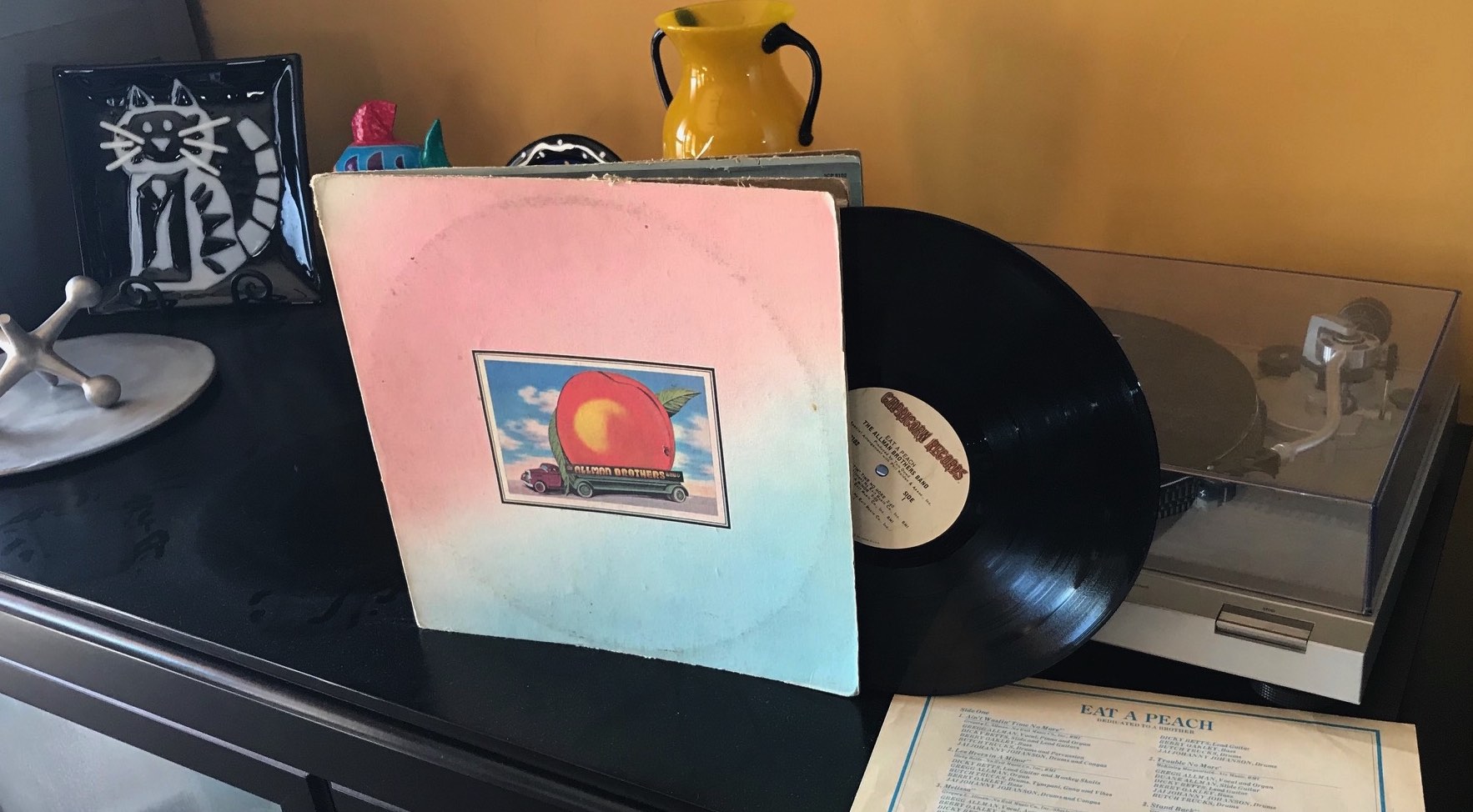 After 45 years, my Eat a Peach album cover is practically shredded. The records are scratched to shit. But that song remains one of my favorites from one of the greats – not just for the music, but mostly for the message.

I killed 15 minutes scanning my Twitter feed today. That’s 15 minutes of my life I’ll never get back. I thought, what a freakin’ waste of time? and wrote this post. We all waste a lot of time. The thing is, we never know when the end will come. Sometimes we just need a reminder to live while we’re here.