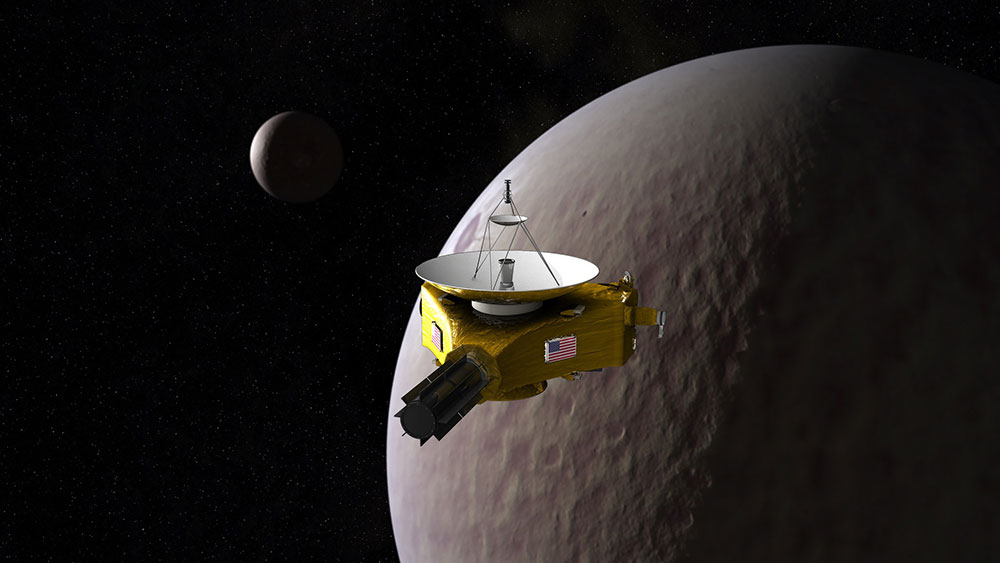 If you want to go to Pluto, better bring your Uggs and a flashlight. The dwarf planet is so far from the Sun that it’s perpetual nighttime with a surface temperature of minus 390 degrees Fahrenheit.

As Nasa’s New Horizons spacecraft approached Pluto, scientists expected to find very little going on there. Just a solid icy rock pockmarked with craters like a warped gray golf ball made by rock people with no sense of aesthetics.

Imagine their surprise to discover the surface is geologically active. It has mountains, planes, and glacier-like ice flows. Some of these features were created just 100 million years ago – practically yesterday in planetary time.

You know what that means, don’t you? It means that, way out in the boonies where everything should have been frozen solid since day one, there’s enough heat inside Pluto to create convection currents that covered billions of years of impact craters with relatively new material.

One explanation is that Pluto is experiencing global warming. Actually, scientists have known that for years from long-range observations but actually seeing geological activity is another thing entirely. Wouldn’t it be wild if Pluto has ice age cycles just like we have here on Earth?

Perhaps the most startling discovery is what New Horizons didn’t find on Pluto. People. Strange as it may seem, there were no human beings, no climate scientists, no politicians, and no Al Gore. Climate change without people or atmospheric carbon dioxide. Hmm … now that’s a real head scratcher.

Meanwhile, Venus may be closer to the sun than we are but it’s twice as far away as Mercury, and yet its surface temperature is 863 degrees Fahrenheit. The reason? A runaway greenhouse effect that turned a planet that may once have had oceans into a living hell. Again, no people on Venus. But its atmosphere is loaded with carbon dioxide even though it has an ozone layer. How inconvenient.

Here’s the thing. Climate change is a common planetary phenomenon.

The Earth has actually undergone several lengthy ice ages that include intermittent cold periods called glacials and warm periods called interglacials. We are, in fact, in the middle of an interglacial period of an ice age right now. And these cycles were going on long before humans evolved and began using deodorant and driving Fords.

There are lots of factors that interact to create Earth’s climate cycles. There’s solar output, orbital variations, plate tectonics, magnetic field changes, and atmospheric changes. The very notion that human behavior is having a dramatic affect on the Earth’s climate is nothing but popular pseudoscience sold to the masses by greedy politicians.

Besides, there is no scientific consensus on climate change, as you can see here and here.

Look, Al Gore knows about as much about global climate change as Jenny McCarthy knows about vaccines and autism, Suzanne Somers knows about human health, Tom Cruise knows about depression, and Tony Robbins knows about what makes real executives and business leaders successful. In other words, zilch.

We are living in the golden age of fads. Some day we’ll look back and realize that manmade global climate change was the biggest hoax of all time. Meanwhile, it’s the primary driver behind the energy policy that dramatically affects how each and every one of us lives. Hard to believe.