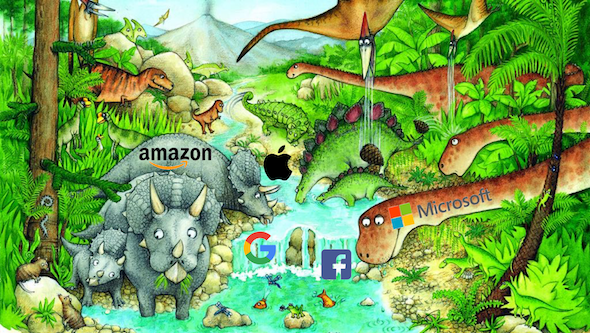 You’ve got to marvel at how tech giants have come to dominate the S&P. You have to dig way down to number seven by market cap before you hit a non-tech company. In case you’re wondering, that would be Berkshire Hathaway, with Johnson & Johnson, Exxon Mobil and JPMorgan rounding out the top 10.

The reasons for that ever-growing gap are not as straightforward as you’d think. Granted, technology is disrupting every industry on Earth, but a much less talked-about aspect of juggernauts like Apple, Google, Microsoft, Facebook and Amazon is the way they’re organized and run.

To say they’re different from the industrial giants of yore is like saying humans are different than, well, dinosaurs.

Today’s tech companies are much leaner and more focused. Their organizations are far flatter and less bureaucratic. And they actually do corporate governance right: Their executives are incentivized to move fast and take risks, not sit on their butts and get rich. That’s no coincidence. It’s by design. Being lean and adaptive is in their DNA.

Take GE’s recent meltdown. ICYMI, shares of the industrial giant are in free fall, down nearly 15% since Monday and more than 40% year-to-date. Why? The conglomerate has been mismanaged for ages. It has no strategic focus or synergies. It’s mired in debt. And its organization is a top-heavy relic with pricey pension obligations.

Former CEO Jeff Immelt – with his layer upon layer of high-paid executives and 18 board directors – ran the company into the ground. No wonder. They all made big bucks just for showing up and sticking around … and coming up with silly slogans like “Imagination at Work.” And current CEO John Flannery is just more of the same.

In terms of everything that matters – strategy, products and organization – GE is a dinosaur. And you know what happened to them. They’re buried under layer upon layer of decomposed matter and sedimentary material – just like GE.

The media gives Amazon CEO Jeff Bezos a hard time for creating an uber-competitive culture he calls purposeful Darwinism. I challenge anyone to come up with a better blueprint for an organization that’s built to adapt and thrive in a highly competitive global market. It’s a damn good metaphor, when you think about it.

You see, corporations have the potential to live and be productive far longer than people. GE has been around for 125 years. The problem is, markets don’t stand still, they change and grow, sometimes surprisingly fast. And if a company’s growth does not consistently outpace the market, it will lose share and eventually go the way of the dinosaur.

Time will tell if today’s tech giants are built to survive over the long haul. Their cultures certainly seem to be designed for continuous innovation and market disruption. But then, you know how it is with organizations of man: There’s always that unpredictable human factor. In other words, you just never know.