Posted by Steve Tobak on November 20, 2017 in No Comments 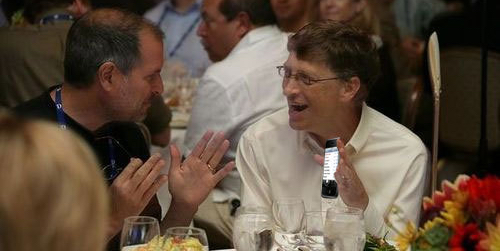 If you look at the world’s most valuable technology companies, you’ll notice something interesting. Not a single one invented the category of products they’ve come to define. The vast majority of their enormous profits come from markets they did not create.

Whether it’s Apple in smartphones, Google in search, Microsoft in operating systems, Facebook in social networks or Amazon in ecommerce, when these companies launched, nobody could have predicted their eventual path to domination.

What does that tell us? For one thing, you don’t have to be first to be number one. But I bet you already knew that. Far more important is that every one of those companies’ founders chose a ridiculously improbable path that challenged conventional wisdom.

Trust your instincts even when everyone says you’re crazy. Easier said than done. Challenging the almighty status quo to do what everyone says can’t be done is not for the faint of heart. But that’s exactly what these founders did, ignoring the advice of the many and trusting their own focus group of one or two.

The pundits thought Steve Jobs was insane to get into the dog-eat-dog cellphone business. In 2007, John Dvorak said what everyone was thinking: “Apple should pull the plug on the iPhone,” he wrote, “there is no likelihood” it will be successful. Today, the iPhone alone generates more revenue and profits than nearly every S&P 500 company.

Dvorak later called the iPad tablet a “giant iPod Touch” that would have nominal market impact. Wrong. So wrong. The iPad-dominated tablet market surpassed PCs in 2015, just five years after its introduction.

And everyone thought Apple was crazy when it opened its first retail stores in 2001. Today, Apple stores are the most lucrative retail space in the U.S.

In 1998, Stanford grad students Larry Page and Sergey Brin shopped their search engine to just about every venture capitalist and Internet company that would listen. They were repeatedly met with the same response: The world doesn’t need a stand-alone Internet search company.

Finally, one man, former Sun co-founder Andy Bechtolsheim, wrote a check for $100,000 and Google was born. For a while, it looked like everyone was right; Google’s share of the search market was a dismal 7.8% in 1999.

Then, in October of 2000, the Silicon Valley startup launched AdWords. Who knew that the combination of search engine and advertising platform could spawn a business model that mints cash — and turn Google into one of the most valuable and powerful companies on Earth?

In the summer of 1980, some suits from IBM approached a young software developer about an operating system for a personal computer. Since Bill Gates’ specialty was programming languages, he referred them to someone else. When that didn’t work out, he agreed to do it using a modified version of QDOS, which he bought for $50,000.

Instead of simply selling it outright for a quick profit, Gates licensed DOS to IBM on a non-exclusive per-unit royalty basis. DOS became Windows and more than a billion PCs and countless apps would be built on top of that ubiquitous operating system. Today, Gates is among the richest men on Earth.

Not every successful founder has a comparable story, but those that do have one thing in common: The kind of vision that can truly change the way we live and work. The potential to disrupt markets on that scale is a rare thing – so rare that if these founders did not believe so strongly in themselves, their companies would never have made it.

Don’t get me wrong. It takes a lot more than cajones to turn a startup into a business powerhouse. And having the courage, self-confidence and tenacity to trust your gut when everyone says you’re nuts will not, in and of itself, make you the next Mark Zuckerberg. But if you’ve got the talent to back it up, it’s a damn good start.