Posted by Steve Tobak on December 20, 2017 in No Comments 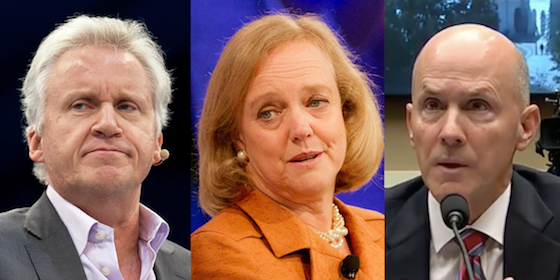 Every year, Santa and I get together at his place, break out the nog, boogey down to some righteous Christmas toons, and talk about the year’s naughtiest chief executives. We can’t do a thing about their outrageous pay packages, but the fat man can’t resist filling their Christmas stockings with enormous lumps of coal. And I don’t blame him one bit.

While Santa insists on keeping our methodology strictly on the down low, I can say that we only consider CEOs of publicly-traded U.S. companies that held the title for at least part of the year. So Harvey Weinstein, who we can all agree was the naughtiest and creepiest CEO of the year, is ineligible, since The Weinstein company is privately held [sigh].

Even with that relatively narrow scope, it’s surprising how many CEOs were naughty this year. Very, very naughty. Without further ado, here’s our Worst CEOs of 2017 list, counting down from …

Mayer finally got to wash her hands of Yahoo, selling the beleaguered company to Verizon for a fraction of what it was worth in its heyday and admitting defeat after an unsuccessful multiyear turnaround effort, but not before presiding over the biggest data breach in history. The hack affected three billion accounts – more than half the world’s adult population. And no, this is not Mayer’s first time on the list; she is, in fact, a two-time offender.

As I sat down to write, I thought, Could this be the first time in five years that Lampert doesn’t make the list? Nah. Amidst continuing store closures, revenue declines and red ink, Lampert still presides over the agonizingly slow-motion train-wreck that has characterized Sears for as far back as I can remember. The stock peaked briefly in April, then shed nearly three quarters of its value as the death spiral goes on.

With video all the rage and drones starting to take off, you’d think the market leader in action cameras would be going gangbusters. Not a chance. Instead, GoPro continues to crash and burn for a second straight year. The stock is down 90% from its all-time high. In a recent interview, Woodman admitted to wondering, “Where did we start to suck at this? What is going on?” Investors would like to know too.

If doing the same thing over and over and expecting a different result is the definition of crazy, then Westergren is the undisputed mayor of Crazytown. After letting Spotify and Apple eat away at Pandora’s market share for years, Westergren finally got around to launching an on-demand service before stepping down … again. Too little, too late. The losses are piling up and shares of the internet radio pioneer are down 60% this year and nearly 90% off their all-time high.

The once-popular eatery whose brand used to be synonymous with locally farmed fresh ingredients continues to be plagued with quality control issues following major contamination problems at multiple restaurants in 2015. Revenues have started to bounce back, but not the stock, which is down 40% off its 2017 high and 60% since mid-2015. Think maybe it’s time for Ells to finally admit he’s not cutting it and step down? You think?

The billionaire entrepreneur was indicted on racketeering charges stemming from an alleged scheme to bribe doctors to prescribe a powerful opioid and defraud insurers into paying for it. Shares of the once high-flying stock, which have lost nearly 99% of their value since the heady days of the dot-com bubble, are off 50% from their 2017 peak.

After laying off 85,000 employees and $20 billion in write-offs, Whitman’s turnaround solution for HP was a financial engineering scheme to split the company in two. After failing to land the Uber CEO job – she reportedly had it in the bag but overplayed her hand – Whitman said on an HPE earnings call, “[I’m] not going anywhere,” then preceded to quit two months later. What she did to HP wasn’t a turnaround; it was a bloodbath. I hear she now wants to run for POTUS. God help us.

Responsible for a mammoth data breach that affected 143 million Americans, Smith somehow managed to turn a national crisis into a public relations nightmare. Failing to recognize that a cyberattack had occurred, hackers continued to access sensitive information for 10 weeks. And Equifax botched the response in every way that mattered, adding to customer frustration and confusion. The stock lost more than a third of its value in the week following the disclosure and Smith wisely resigned.

Immelt more or less ran the company into the ground before stepping down in August. Under the guise of transforming GE from an old-school industrial giant to an innovative tech company with cute slogans like “Imagination at work” and a lot of talk about the Internet of Things, Immelt drowned the company in debt and never got around to shedding underperforming businesses like its power, oil and gas segments. Shares of GE are down 44% this year and some on the street see this as the beginning of the end.

As for Immelt’s legacy as the 16-year chief executive of one of the world’s most famous and storied corporations, that is now clearly in tatters. The man was no Jack Welch, that’s for sure. Hard to believe Uber seriously considered him to succeed Travis Kalanick as CEO. I think the ride hailing startup dodged a bullet by avoiding both Immelt and Whitman.

P.S. I’m sure someone’s going to ask, Why nine and not a round number like 10? Santa and I couldn’t decide between United Airlines chief Oscar Munoz, Under Armour’s Kevin Plank, Matt Salzberg of Blue Apron and a few others. We debated for hours and finally succumbed to the effects of the nog and called it a night.