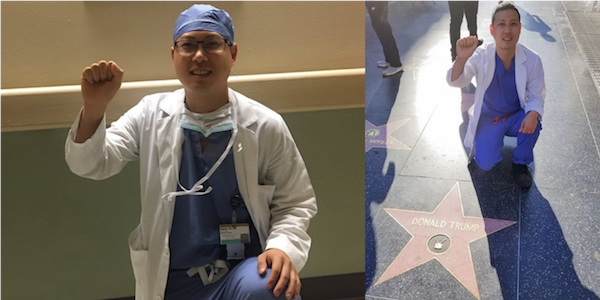 “May you live in interesting times.” – Anon

And imagine that you, Dr. Gu, somehow manage to get yourself subpoenaed by Congress over controversial embryo research, blocked on Twitter by one Donald J. Trump, in a lawsuit against said President over said blocking, pictured taking a knee like Colin Kaepernick in scrubs at the hospital, in verbal or physical altercations with at least one patient and one doctor at work (because of said tweeting), and tweeting furiously in great detail about the injustice of it all – all in the span of just three years.

Got all that? Now what do you imagine happened next? Yup, you got fired. Coincidence? I don’t believe in coincidences. That much controversy doesn’t just happen to one person.

As National Review reporter Kat Timpf wrote after the Roseanne Barr show was cancelled by ABC, “I’ve always sarcastically said that the best thing about Twitter is that not only do you not get paid for your tweets, but you can also get fired for them,” Timpf said. “It really is one of the more idiotic ways to ruin a career, and I can never make sense of it whenever it happens.”

Gu variously claims that he was fired for his political views, views on social justice, controversial research, sharing details of his experiences at VUMC on Twitter, racial discrimination or suing President Trump for blocking him on Twitter. He sees himself as a victim. The instrument of his demise varies, but one thing remains the same: Nothing is ever his fault.

VUMC, on the other hand, says Gu’s contract was not renewed over issues with work performance and professionalism.

Look, I don’t know this guy from a hole in the wall. But earlier today I came across this tweet and responded:

Your freedom of speech and internet access seem to be just fine and will remain so, in spite of all the fear mongering. Not to pick on the good doc, but this is exactly what’s wrong with Twitter: attention-seekers who don’t have a clue tweeting political talking points.

That’s how I came to know of Dr. Gu. A doctor with 160K Twitter followers. I was intrigued. On a hunch, I scanned his Twitter account. Then I Googled his name and the whole sordid story unfolded.

He comes across as a slightly unhinged sociopolitical activist and a perpetual victim at work. Don’t even get me started on his poor little raccoon analogy. It’s not surprising that the Twitterverse sees him as a hero-turned-martyr for speaking out on his beliefs. Or that some patients aren’t ecstatic about having him treat them or their children.

These are interesting times. That’s just how it works.

Dr. Gu says it’s his dream to become a surgeon and help babies. If that’s true, he sure doesn’t act like it. He acts like he wants to use his position to be famous. To get attention. And when that comes back to haunt him, he plays the victim card, as if all this stuff just sort of happens to him.

At least that’s what it looks like to me. But then, I’m no shrink.

Maybe he is addicted to or at least a living magnet for controversy. Regardless, you can’t dispute that Gu’s Twitter activity has gotten in the way of achieving his dream. And it is, as Timpf says, “one of the more idiotic ways to ruin a career.” It is also entirely on the good doctor and nobody else.