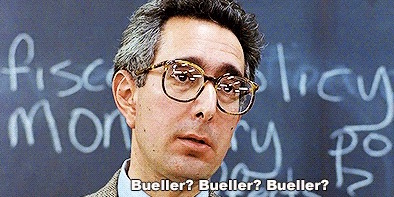 Tell me again why I bother blogging on Fridays in the summertime? Everyone’s either on vacation, getting a jump on the weekend beach traffic or just screwing off somewhere. Is anyone even out there. Bueller? Bueller? Bueller?

If it’s ok with you (what am I saying, there’s nobody else here, just me and my boxer Fletch) I’m just going to do a data dump of the week’s nonsense and clear my mind for the weekend.

Everything except Elon Musk, that is; I’ve had enough of that guy’s BS to last a freaking lifetime.

Twitter boss Jack Dorsey is being cursed all over Silly Valley for not banning Alex Jones and his “offensive content” as Facebook, Apple and Google’s YouTube have. Who’s Alex Jones? Guess he’s a right-wing conspiracy theorist. What’s so offensive about that? Who the f— knows? I don’t follow that stupid s–t.

So we have a U.S. Space Force. Think they can slap a warp drive on the USS Enterprise and make an aircraft carrier fly? You know they have to go out and find a real Captain Kirk now, don’t you? Where no man has gone before …

A cable news program had a segment on whether Trump derangement syndrome was actually a thing or not, “More and more psychologists say they’re seeing the symptoms specifically an overpowering fear that Trump represents the end of the world,” said the commentator. I mean, really?

Smoke from the raging northern California wildfires has descended on the Santa Cruz Mountain valleys where I live, hundreds of miles to the south. Nobody ever talks about the tragic loss of animal life and that just about every wildfire has a human cause. Very sad.

Both the left and the right are claiming victory from the week’s special elections in Ohio and elsewhere. Aside from that being impossible – elections are sort of binary things – it’s now apparent that the midterms won’t turn out to be a red or a blue wave but more like a purple nurple, according to Greg Gutfeld on The Five.

Spent a couple of hours fixing the wife’s Epson printer – she hadn’t used it for a while and the print heads got all gunked up. Got ink all over the place but at least I got it working again. So I told her to print something every so often, whether she needs to or not. Think she’ll actually do it? Not a chance.

Updated my website, including a brand new consulting page. Now you can instantly book a free 30 minute consultation with yours truly. Can’t beat that. Check it out here.

The Yankees swept the White Sox right after getting swept by the Red Sox. If only they could have swapped those sox around. #TooMuchToAsk

That’s all I got. Have a great weekend, folks.