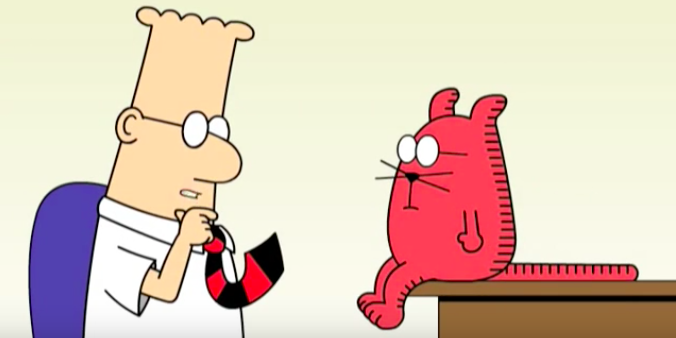 Sometimes I think the best advice I can anyone with a job is this: Try not to be an idiot. If people would just use a little common sense in the workplace, business pundits would starve. And we certainly wouldn’t need prescriptive nonsense on what bosses and employees should and shouldn’t do everywhere we look.

A trending story in the Wall Street Journal today is How Bosses Waste Their Employees’ Time, which essentially says that managers are clueless about the power of their words and actions, while their subordinates are mindless drones who take everything they say verbatim and will say or do just about anything for a good boy pat on the head.

Of course there are some threads of truth in there somewhere, but if the author dumbed down the employee-boss relationship any more he’d end up in a Dilbert cartoon. Come to think of it, even Scott Adams’ hapless characters have more common sense and self-awareness than he gives workers and bosses credit for.

The very notion that managers aren’t even remotely aware of the impact they have on those whose jobs and paychecks they control is ludicrous on its face, as is the notion that employees have no responsibility to get to know their bosses and learn how to manage up.

Not to make any outlandish assumptions but I would think that anyone who’s ever been a kid would understand how that sort of thing works. And if you’ve been a parent, all the better. It’s sort of basic human relationship stuff.

Granted, some bosses want their underlings to sugarcoat the truth and blow smoke up their asses as much as they get off on ordering them around and getting them to jump through hoops. But the Journal story is not about those kinds of bosses; it’s about well-meaning leaders who just happen to trip and fall into cluelessness. How ludicrous can you get — in the WSJ, no less?

Related: You Won’t Find the Next Peter Drucker on TED or Twitter

Personally, I think we’re inundated with this sort of mindless content for three reasons:

One, we eat it up. As if we don’t know any better and have nothing better to do with our time, which makes us out to be a bunch of gullible slackers.

Two, business and leadership gurus know that and are all too happy to spoon feed us, which makes them out to be a bunch of greedy opportunists.

Three, we all seem to have fallen into the trap that it makes sense to make overly-simplistic generalizations about entire groups of people, i.e. bosses and employees, as if there are no individuals with individual characteristics, behaviors or responsibilities involved in human interactions whatsoever.

It’s that last one that I find most concerning, although none of it reflects well on any of us. On the other hand, maybe we really do have too much time on our hands and nothing in our lives to challenge these enormous brains that evolved so we can conquer the world, which our ancestors already got out of the way long ago.

In other words, we’re all bored and devolving.

In any case, my advice for today’s leaders is simple: Skip all the prescriptive nonsense, use a little common sense and try not to be an idiot. Also try not to assume that everyone but you is an idiot — as apparently some biz school profs do. As for employees, ditto. If you can just do that, you’re probably way ahead of the game.