Posted by Steve Tobak on September 4, 2018 in No Comments 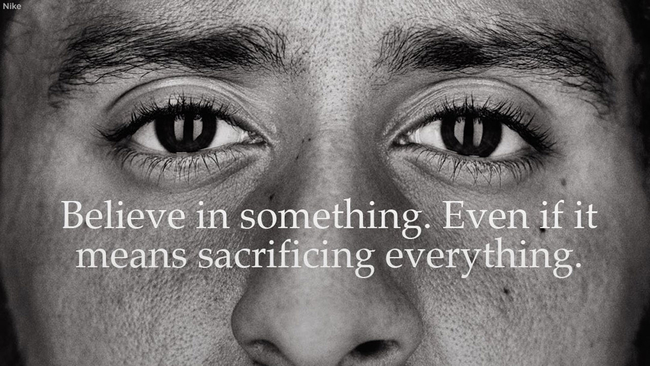 Everyone is losing their shit over Nike’s divisive new ‘Just Do It’ ad featuring Colin Kaepernick. The question is, why did Nike’s execs pull the trigger on such a risky strategy? The pundits say it was a calculated business decision based on winning more customers than they lose. I say the pundits are wrong. Here’s my thinking.

Since President Trump waded into the NFL’s national anthem kneeling hoopla, Nike’s choice of Kaepernick, who sparked the controversy, was definitely a politically divisive one. That much is clear. The ad’s message, on the other hand — “Believe in something. Even if it means sacrificing everything.” — is a bit more intriguing.

It sounds positive on the surface, like a typical Just Do It ad should, but if you think about it, it speaks to a false premise. While I agree that there are times to make sacrifices on behalf of our beliefs, that’s not what happened in the case of the former 49ers quarterback.

Kaepernick did not actually know he was sacrificing anything when he knelt during the national anthem. His departure from the 49ers had nothing to do with it; he actually opted out of his contract. And the controversy over no other teams picking him up came later, after the fact.

The message also speaks to a false dilemma. Even if you believe in something that doesn’t mean you need to do something boneheaded like protest on your employers’ precious time and risk crapping all over the NFL’s pristine and extremely valuable brand.

With his celebrity status as an NFL quarterback Kaepernick could very well have taken his protest to social media or pretty much anywhere and gotten the kind of attention he sought. I seriously doubt if he thought it through. Sure, the guy shot himself in the foot, but I think it was accidental.

Where I think the experts really go wrong is the sort of pervasive notion that customers make conscious buying decisions, weighing the pros and cons of a product as well as what the brand stands for. In reality, some part of that choice happens at a subconscious level.

Granted, some will make conscious decisions to become Nike fans for life or #NeverNike based solely on this campaign. More likely it will just become one of many subconscious factors that weigh in on buying choices down the road.

Take actors who for various reasons have become divisive figures – Tom Cruise, Robert de Niro, Kevin Spacey, for example. You might make a thoughtful choice of whether or not to see one of their movies soon after some controversy they were involved in. Fast forward a year or two and you’re probably not even aware of why you chose a different actor’s film.

Truth is, brand choices and loyalty are complicated matters and even companies like PepsiCo, Facebook and Nike – companies you’d think would know all there is to know about that sort of thing – don’t have all the answers. They’re never sure how it’ll go down. Sometimes the decision comes down to intangible factors.

This seems like one of those times. It feels like a roll of the dice to me. Like a bunch of Nike execs are sitting in a conference room debating the issue when one says, “Screw all the data, the pros and cons. If the message is true — that we should believe in something — then we should believe in our brand. Let’s just do it.” And so they did.