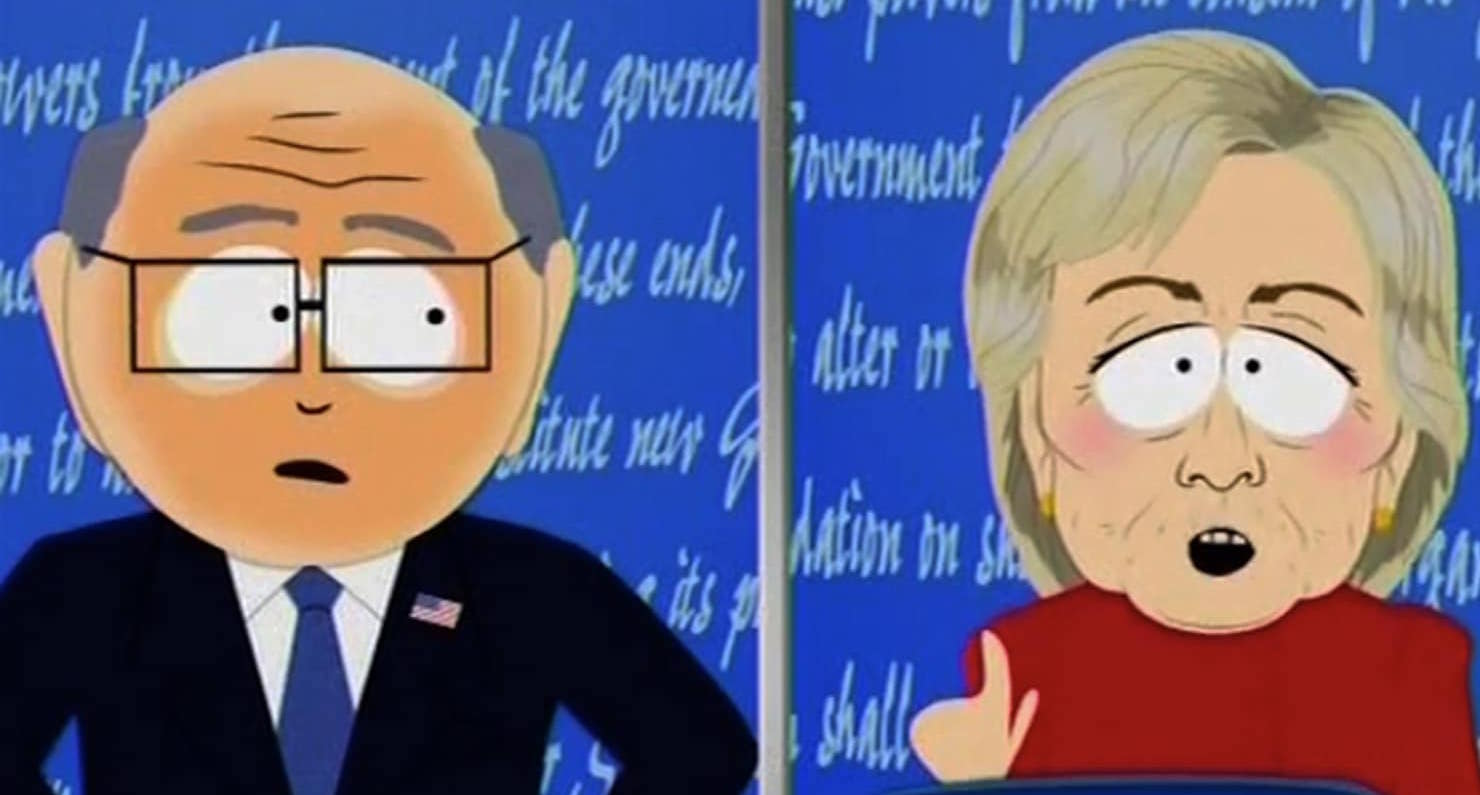 Ahead of the midterm elections I give you one of my favorite FOX Business columns of all time, a riff on South Park’s season 20 premier that portrayed the 2016 presidential election as being between a “giant douche” and a “turd sandwich.” I’m sure you can figure out who was who. Enjoy.

Only two people can get away with characterizing the 2016 U.S. presidential race as being between a “giant douche” and a “turd sandwich:” Matt Stone and Trey Parker. That’s sad, considering the precision with which South Park’s creators hit the nail on the head in the premier episode of season 20.

In a nation characterized by a seemingly unbridgeable political and cultural rift, the one thing everybody should agree on is that nobody is going to feel good about the outcome of this election. We just don’t want to see the candidate we hate end up in the White House. But only the most cynical among us are willing to admit that.

If we can’t see the humor – and the uncomfortable truth – behind the popular cartoon’s twisted satire, that just might explain why we find ourselves in such a dark and divided place. It’s one thing to take the issues seriously, it’s another thing entirely to take ourselves so seriously that we can’t see the crazy conundrum we’ve created.

After four terms of the two most polarizing presidents in modern history, the one thing we don’t need is another leader that people either claim to like for no logical reason or actually hate for all sorts of good reasons. And yet, here we are, letting our emotions get the better of us … and not the good kind of emotions, either.

The 2016 election cycle should be about the economy and national security, but political correctness has undoubtedly been an emotional flashpoint. While Trump supporters are sick of having to watch what they say, many I talk to still bristle at the way South Park characterized him. And they just don’t see the irony in that.

How can anyone say with a straight face that calling opponents silly names like a third grade bully, tweeting like a Twitter troll, insulting at least half the voting public and trying to beat a powerful political dynasty with virtually no ground game whatsoever is a smart way to win an election.

For more than a year now, I’ve heard otherwise diehard Republicans say of the real-estate magnate, “I like the message, I just don’t like the messenger.” Indeed, he is really hard to like. Someone should tell Trump that behaving like a mature leader instead of a “giant douche” is not being politically correct, it’s being politically savvy.

Not to pick on Trump; Hillary Clinton certainly has her own issues.

Making believe the Middle East did not destabilize on her watch, sending thousands of classified emails from an unsecured personal account, co-mingling State Department and Clinton Foundation business and defying Congress by wiping a server clean to cover her tracks is not exactly a brilliant campaign strategy either.

Neither is trying to run an insular campaign and control the message against a prolific opponent who is chomping at the bit to call out her stunningly transparent shenanigans to anyone, anytime, anywhere. If Clinton supporters can’t see her dismal “honest” and “trustworthy” poll numbers for what they are, they deserve the sandwich they ordered.

Maybe this is an era like no other. Maybe all those years of gridlock, dysfunction and downright incompetence in Washington has sapped our ability to see things rationally and forced us to rationalize everything we see. Or maybe we’re just not willing to admit that we’re about to elect a president that few of us really trust or like.

There is one other possibility, though. Maybe half of us are so fat, dumb and happy with our gadgets and entitlements that we couldn’t care less what’s between those two slices of bread. And the other half are so desperate to stop the demise of a once-great nation that we refuse to see the pompous elephant in the room.

Regardless of how we got here, I think we’ll all be better off walking into November with our eyes wide open and our feet planted firmly on the ground. If we set the bar low enough, we won’t be disappointed with the outcome. As long as we never lose our ability to laugh at ourselves, we will never really be lost.