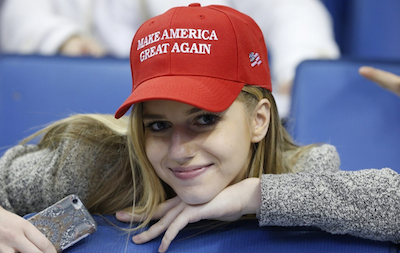 The media and everyone else who acted out on a 16-year-old kid from Kentucky have a blanket excuse for their own ludicrous behavior. They were triggered.

The word “snowflake” used to refer to thin-skinned millennials. Now the term applies to anyone who is offended by innocuous things – you know, like MAGA hats and kids’ faces – and uses that as an excuse to act out like a little freaking brat. You know, like all the coastal elites did to a high school kid last weekend.

An offensive Make America Great Again hat. A “white privilege smirk.” A “look of white patriarchy.” A “punchable face.” Can the media snowflakes who spewed – continue to spew, in some cases – that sort of rhetoric in reference to a Covington Church boy really not hear how idiotic they sound? Really?

Honest question. Have you ever seen a more punchable face than this kid’s? pic.twitter.com/jolQ7BZQPD

Anyhow, “trigger” is the new term for shirking personal responsibility – blaming your own childish behavior on someone else and making yourself the victim. If someone or something triggers you, then you automatically get a pass for whatever messed up crap you do after that.

We used to call that pushing your buttons. Same thing.

But any decent shrink will tell you that blaming someone else for pushing your buttons is just an excuse for the bad behavior that follows. You see, you have to let them push your buttons. And get this. In our heads we actually create buttons for others to push because, on some bizarre masochistic level, we dig that. At least some of us do.

This study in deviant psychological behavior has become the new normal. What starts as a desperate need for attention – reinforcement of our own little egos in a vain attempt to make us feel bigger – inevitably ends in groveling and destruction.

We used to reserve that sort of dysfunctional interaction for our families, friends and coworkers. Now we act out our childhood issues on unsuspecting people in public – on Twitter and Facebook and in the media. It would be hilarious if it wasn’t so messed-up.

In reality, a hat is just a hat. A look is just a look. And someone’s face, just like his gender and the color of his skin, is just something he’s born with. Any other meanings or motives you assign to that or anything else is just your own screwed-up little brain playing childish games that are not likely to end well in an adult world.