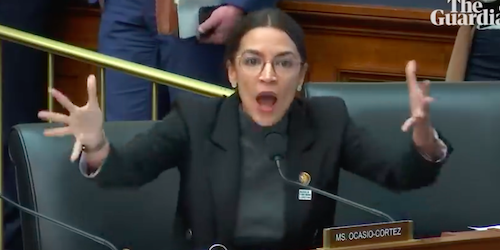 “People are dying. They are dying.” – Rep. Alexandria Ocasio-Cortez

I guess Alexandria Ocasio-Cortez, aka AOC, is sort of bummed that the more folks get to know her and what she stands for the less they like what they see. The latest poll numbers show that 36% find her unfavorable, 23% see her as favorable and 38% don’t know enough about her. I’m thinking that last group are the lucky ones.

The liberal media says it’s the conservative media’s fault. Also that she’s young, Latina, a woman, yada yada. Funny how people have become so indoctrinated into identity politics that they completely miss the obvious. Maybe people don’t like the freshman Rep because her fanatical fearmongering is ludicrous and her radical policies are dangerous.

ICYMI, AOC’s response to a 57-0 Senate vote against her Green New Deal resolution (43 Senators voted “present”) only made matters worse. Not only did her rant during a recent House Committee meeting make her sound like a raving lunatic but almost nothing she said made sense — or had anything to do with climate change or the Green New Deal.

I’ll break AOC’s lunacy down for you in a second but first you might enjoy watching this clip of her meltdown for yourself:

AOC: This is not an elitist issue; this is a quality-of-life issue. You want to tell people that their concern and their desire for clean air and clean water is elitist? Tell that to the kids in the South Bronx, which are suffering from the highest rates of childhood asthma in the country.

ST: High rates of childhood asthma in the South Bronx goes back almost a quarter century. Mostly it’s due to dust mites, cockroach feces and body parts, rat and mouse urine and other inner-city overcrowding and poverty issues. In other words, it has absolutely nothing to do with climate change.

AOC: Tell that to the families in Flint whose kids have their blood ascending in lead levels, their brains are damaged for the rest of their lives. Call them elitist. People are dying. They are dying.

ST: The water pollution problem in Flint, Michigan stems from a decision to shift the city’s water source from Lake Huron and the Detroit River to Flint River. Lead leached from water pipes into drinking water due to insufficient water treatment. All the lead pipes are being replaced. Again, zero to do with climate change.

Also nobody is dying.

AOC: This is serious. This should not be a partisan issue. This is about our constituents and all of our lives. Iowa. Nebraska. broad swathes of the Midwest are drowning right now. Underwater. Farms, towns that will never be recovered and never come back.

ST: The current Midwest flooding is due to a series of unfortunate events: First the soil saturated from fall rains. Then it froze in winter. Snow piled up on top. Then a rare bomb cyclone brought warm weather and heavy rain. That coupled with snow melt over the flat frozen landscape created a perfect storm for river flooding.

While some activists will attribute pretty much any unusual weather event to climate change, the experts say that’s not the case.

According to NOAA climate scientist Stephanie Herring there is no clear scientific connection between warmer temperatures and complex weather events like droughts, floods, hurricanes and tropical cyclones. And the 2018 National Climate Assessment  found that “formal attribution approaches have not established a significant connection of increased riverine flooding to human-induced climate change.”

AOC: We talk about cost — we’re going to pay for this whether we pass a Green New Deal or not. Because as towns and cities go underwater, as wildfires ravage our communities, we are going to pay.

ST: Now climate change causes floods and wildfires. I mean, even if there were no other factors behind such complex events, how is it possible for the same underlying phenomenon to be responsible for both more and less atmospheric moisture? Sheesh.

I could go on but you get the point. AOC’s fanatical fearmongering and radical policies are lunatic fringe material. That, and scaring Amazon out of New York, is why her poll numbers are tanking. Period.