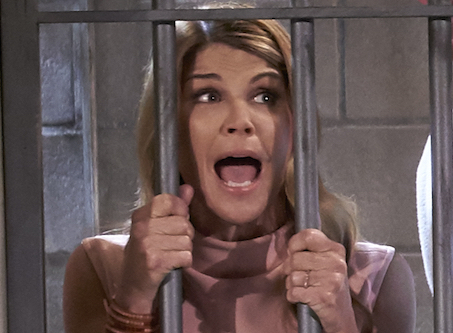 The parents indicted in the sweeping college admissions scam are apparently shell-shocked that federal prosecutors are playing hardball. The first wave of scammers to appear in court were offered plea deals with no prison time, but only in exchange for admissions of guilt and felony convictions. And that could cost them their lucrative careers.

Many if not most of these elites have contract clauses that trigger termination or loss of license to practice medicine or law if they’re ever convicted of a felony. So they’re caught between a rock and a hard place – fight the charges and run the risk of doing time or do the deal and potentially lose their jobs.

The question is, what the hell did they expect? You know, don’t do the crime if you can’t do the time and all that.

Related: Thoughts on the College Admissions Scandal Rocking the Nation

As a corporate officer of several public and private corporations I always knew the risks of turning to the dark side. I watched as some of my peers went down for fraud, insider trading, stock option backdating and other white-collar crimes, knowing all the while that it could be me if I strayed from the straight and narrow path.

To me the risk was never worth it. When you achieve a certain level of success, the last thing you want to do is risk it by doing something stupid. On the contrary, the most important thing is to protect what you’ve earned – your finances, your reputation, your family – everything you’ve worked so hard to achieve over the decades.

And what about your freedom?

When you live in a great country that offers you life, liberty and the pursuit of happiness, how can you even think of risking any of them? And for what? A few extra bucks? A little more power? Cheating your kids’ way into an elite college? I mean, where’s the logic in that? How does that equation ever make sense?

Talk about having screwed up priorities. You’ve got to have a screw loose to tempt fate that way. Or no common sense.

Actually, there is another possible explanation – that all of these people have gamed the system somewhere along the line and gotten away with it. So they start to believe they’re infallible or entitled because they’re special. Morals and ethics are someone else’s problem, not theirs.

I’ve covered dysfunctional executives, business leaders and politicians who broke the law or destroyed their careers and companies for a very long time and that sense of entitlement and omnipotence that power and privilege bring was consistent across the board.

I will never understand people who shower elites with adoration. I’m sure many of them are good people but nobody ever stops to ask themselves, if I had their power, how would I handle it? Is my moral compass strong enough or would I let it corrupt me? Would I really be better or worse off than I am?

It’s a legitimate question that everyone involved in the college admissions scandal should have asked themselves long ago. If federal prosecutors continue to play hardball and they get slapped down hard, maybe they’ll ask themselves that now. Maybe then some good will come of all this.

Don’t get me wrong; I’m no boy scout. I was once young and dumb. I’ve made mistakes. Lots of mistakes. But your risk profile should change as you become more mature and prosperous. At least it should. And no matter how successful you become, never forget that you’re flesh and blood and your actions have consequences, just like everyone else.