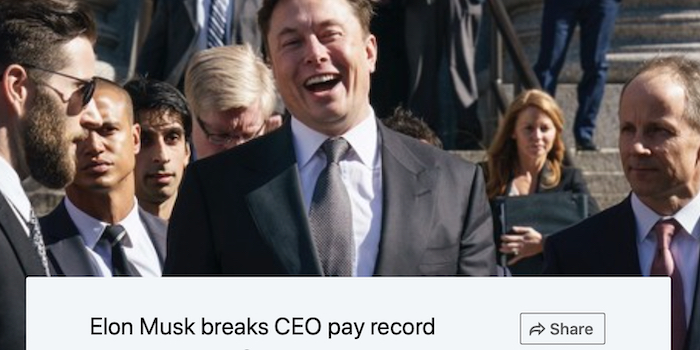 Wonder why the media gets a bad rap these days? They work very hard to earn it. Case in point, the New York Times presents a completely misleading view of CEO pay in an annual survey piece by Peter Eavis, “It’s Never Been Easier to Be a CEO.”

In particular Eavis lists Tesla CEO Elon Musk’s 2018 compensation as $2.3 billion. That’s simply a load of bull. He actually earned $0 in 2018. And the stock options he was awarded are entirely at risk; he doesn’t get a penny unless the company hits aggressive market cap milestones, as a company spokesman points out in Business Insider:

“Elon actually earned $0 in total compensation from Tesla in 2018, and any reporting otherwise is incorrect and misleading. Unlike other CEOs, Elon receives no salary, no cash bonuses, and no equity that simply vests by the passage of time. His only compensation is a completely at-risk performance award that was specifically designed with ambitious milestones, such as doubling Tesla’s current market capitalization from approximately $40 billion to $100 billion. As a result, Elon’s entire compensation is directly tied to the long-term success of Tesla and its shareholders, and none of the equity from his 2018 performance package has vested.”

Not to mention that you’d have to be on crack to characterize Musk’s run as Tesla CEO as “easy.” On the contrary, it’s been an exceptionally rough ride for Musk, as Kevin Williamson correctly points out in his National Review piece, A Distorted View of CEO Pay :

“I am not sure that this is an easy time to be the CEO of Tesla. I doubt that there’s ever a particularly easy time to start an automobile company from scratch. Musk seems to be having a hard time of it just now.

“Eavis himself notes that it is highly unlikely that Musk will meet the business goals that trigger that $2.3 billion payday. To do so, Musk would have to make the shareholders of Tesla about $615 billion, raising the market value of the company from $35 billion to $650 billion.”

Of course that didn’t stop everyone and his brother from covering the news – albeit fake news – verbatim. LinkedIn actually reported that “Elon Musk breaks CEO pay record” on its news feed. Don’t ask me how that’s possible without earning a penny. You’ll have to ask them.

Don’t even get me started on all the usual tools and fools spouting off with their usual social media hot takes, like this one from Stanford biz school prof Jeffrey Pfeffer, who shamelessly uses the misinformation to question the viability of capitalism:

Don’t get me wrong. I’ve been harshly critical of Musk and out of control executive pay for as far back as I can remember. But this sort of ludicrous nonsense – including “at risk” stock options as actual compensation – is nothing but clickbait meant to rile the masses on income inequality and the evils of capitalism. Two things for sure though: It works, and it isn’t journalism.