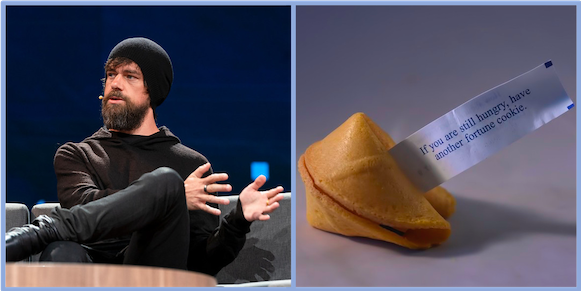 I hear that Twitter and Square CEO Jack Dorsey is so chill about leadership that he doesn’t make decisions, engage in any sort of conflict or do much of anything, really.

Apparently he just sits there, watches, listens, ponders, and occasionally belches out a riddle like a talking fortune cookie, according to Roger Parloff writing for Yahoo Finance.

Then again, Parloff is the Fortune writer who gave Theranos CEO Elizabeth Holmes her first cover story, then wrote a follow-up piece whining about how he was duped. But that’s neither here nor there.

Dorsey is so hands-off that “he once said he thought the perfect meeting was one in which he doesn’t have to say a thing,” according to a former Square exec.

While that may sound benign, passive, even Zen-like, it’s anything but.

By saying and doing nothing, Dorsey is essentially abdicating the CEO function. Instead of doing what he’s paid to do – make smart, well-informed decisions – he simply lets his executives fight it out in Darwinian fashion.

I can tell you from experience, that’s a pretty dysfunctional leadership style that often results in bad outcomes for both the leadership team and the company.

Don’t get me wrong. It’s one thing to follow eastern principals from I Ching and whatnot. Some of us yang types could use a little more yin in our style. That said, leaders who refuse to lead when the situation calls for it are just not doing their jobs.

No wonder Dorsey can run two companies. Doing nothing doesn’t take much time. In all fairness, he also has to make time to do his chronic ice baths, barrel saunas and obsessive tracking and journaling of everything he does. Never mind the bananas.

Not to pick on the guy. I’ve worked with CEOs who had similar styles. Maybe not so Zen-like but unwilling to engage in conflict and drive the leadership team to make critical decisions. That just leaves everyone in limbo, slowing innovation while undermining morale and productivity.

In every case the outcome was disastrous in the long term. The companies inevitably hit a fairly stubborn and solid growth wall – even long after their CEOs had moved on. As if they were architected to fail by bosses who lacked the vision and drive to take them to the next level.

None of which may be the case with Dorsey. After all, he is only the second co-founder to run two $billion+ companies simultaneously. Who am I to judge?

On the other hand, Dorsey, along with Ev Williams and Biz Stone, did sort of dupe early investors in Odeo (well, not for certain but it sure did seem that way), Twitter’s predecessor company, out of participating in the social media app’s enormous success. That is a fascinating story you can read about here and even more about here.

When it comes to operating performance, Dorsey has mixed results.

Shares of Twitter have meandered aimlessly since Dorsey regained the CEO title in October of 2015. And while he has improved the app’s user interface, Twitter’s brand identity and growth prospects remain elusive.

Square, on the other hand, has done quite well, both pre and post IPO. Shares are up five-fold since the company’s 2015 IPO. So kudos there.

For what it’s worth, I’m a user of both company’s products.

Questions is, how do we reconcile my initial judgement of Dorsey’s lackadaisical style and his lackluster performance at the helm of Twitter with his relative success running Square?

Good question. I honestly can’t say. What I can say is that there are all sorts of factors that go into a company’s success. And while the odds are definitely better with a great CEO, it’s not an absolute requirement.

May I also remind you that there is no one size fits all style CEO. So there is that.

I hear Dorsey’s planning a move to Africa. From there he can run Twitter, Square, a safari ranch and a banana importer. I think he’ll be happy there.