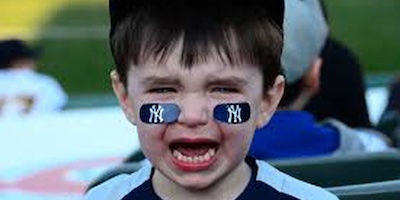 It sucks to be a Yankees fan. I’ve watched them blow so many ninth inning leads this season I want to slit my wrists.

Tonight they blew a two-run lead in the ninth and still somehow found themselves up by a run in the bottom of the 10th in a critical make-or-break series against the division leading Red Sox.

So what do they do? They bring in Brooks Kriske, some loser with a 12.10 lifetime ERA who looks remarkably like a weasel. The guy throws four wild pitches in one inning and blows the game without giving up a single hit, I shit you not.

Some pitchers have trouble finding the plate. This guy couldn’t find a bureaucrat in Washington. A movie on Netflix. A democrat in San Francisco. A virus in Wuhan.

When I was a teenager growing up in Brooklyn my best friend got shot crossing the street over a gambling debt. Oh yes he did.

It was a through-and-through that somehow missed any internal organs and the guy healed in no time. Still, lesson learned: Don’t f— with the mob.

They could actually aim a gun back then — unlike today’s gangs who just spray bullets everywhere. Guess I never realized we had it so good.

Having observed my friends lose their asses with the bookie and OTB (Off Track Betting), that incident led me to the conclusion that gambling takes all the fun out of losing, a principal that stuck with me to this day.

But you know what? Fandom does too. Being a fan totally takes all the fun out of losing. I could be happy tonight but instead I’m bummed and drinking more than I should on a weekday.

Why? Cause my team lost, and in the ugliest of ways.

Is it worth it? Is being a fan worth it?

I have no idea. Guess it helps if you’re into rollercoasters and bitcoin.

All I know is, whoever said “it’s not whether you win or lose but how you play the game” was wrong. He was not a team fan. No fan would ever have said that. Because, if you’re a fan, losing sucks. It just does.