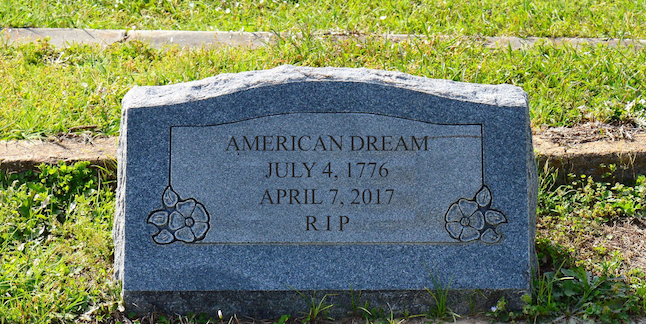 If you Google “Is the American dream dead?” you get upwards of 39 million results and some pretty provocative stories from just about every major news site. Turns out that Americans are pretty much split on the answer to that quintessential question. The most sobering stat is that half of those aged 18 to 29 say it is dead, even though they have their whole lives ahead of them.

The reason for the divide in sentiment has little to do with the facts and everything to do with interpretation. There is no clear definition of “the American Dream,” so people take it to mean what they want it to mean. And that creates all sorts of confusion about the prospects for its attainability, or lack thereof. I’d like to clear that up.

The term was popularized in the 1931 book The Epic of America by James Truslow Adams. The historian offered several variations on the theme, but the one most often sited is, “that dream of a land in which life should be better and richer and fuller for every man, with opportunity for each according to his ability or achievement.”

That’s actually a pretty good description, if you understand that the first part was meant to compare opportunity in America to that of other lands, particularly in the old world, aka Europe. For the most part, it remains true today, although many other nations have spent the last 86 years catching up, which certainly isn’t a bad thing.

It’s the second part that confuses people. While the American dream is an egalitarian ideal – equal rights and opportunity for all – it is, as Adams accurately wrote, a function of ability and achievement. It’s also a function other factors that Adams failed to mention, most notably upbringing, luck and personal choice.

Many seem to think that the dream is a promise – a guaranteed outcome for a life of hard work. That’s nonsense. First, the American dream is an ideal. It is aspirational. Second, it is relative to other nations, where position is far more important in determining a life’s outcome. Third, there are, of course, all those other factors.

Adams went on to say, “It is not a dream of motor cars and high wages merely, but a dream of social order in which each man and each woman shall be able to attain to the fullest stature of which they are innately capable, and be recognized by others for what they are, regardless of the fortuitous circumstances of birth or position.”

That often overlooked sentence is all important. Adams was born in Brooklyn, New York to a wealthy family. He got degrees from Brooklyn Polytech and Yale and worked in investment banking before turning to what was presumably his passion, writing about history, for which he received a Pulitzer Prize.

Clearly, the man was aware that his upbringing played a role in how life turned out for him. And he was an excellent writer who chose his words carefully. When he said “American dream,” he did not mean “American promise.” And therein lies the rub.

Half the population has been sold a bill of goods, that the aspirational dream is supposed to be a guaranteed result. And, upon realizing that it’s not, they think it must be a hoax and therefore unattainable, none of which is true. While it is and has always been dependent on many factors, they can all be overcome.

Attaining the American dream is a function of intelligence, capability, personal choice, work ethic, achievement, upbringing and luck. And it should come as no surprise that those born into wealth have a better chance than those born into poverty. But that is by no means the only or determining factor. It’s simply a headwind, no more, no less.

If being born into privilege were everything, there would be no Apple, Starbucks, Walmart, Verizon, Oracle, WhatsApp or countless other great companies, all of which were built by entrepreneurs and executives who grew up with nothing but adversity, as I did. And nobody would know the names Steve Jobs, Oprah Winfrey or Ralph Lauren.

The truth is, the American dream is alive and achievable by each and every one of us, with the ironic exception of those who believe it’s unattainable for them, and therefore choose not to pursue it on their own merits.

A version of this first appeared on foxbusiness.com