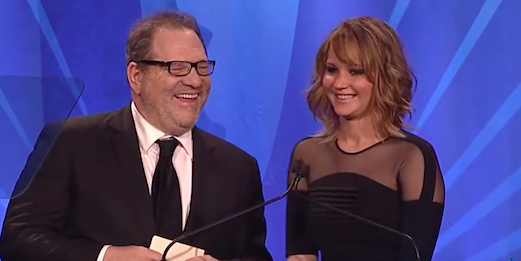 “The lady doth protest too much, methinks.” – Queen Gertrude, Hamlet

Movie mogul Harvey Weinstein was an outspoken and philanthropic champion of women’s causes. Behind the scenes, he’s alleged to have assaulted and made unwanted and explicit sexual advances towards dozens of actresses and employees whose careers he could make or break.

Not only that, the powerful producer’s casting couch escapades were the worst kept secret in Hollywood. After reading the five nominations for supporting actress at the 2013 Oscars, Seth McFarlane joked, “Congratulations, you five ladies no longer have to pretend to be attracted to Harvey Weinstein.”

Of course, now that he’s been fired and publicly disgraced, it’s safe for the Hollywood elite to come out of the woodwork and condemn the acts of a man they one hailed as a God. A man whose ass they kissed for three decades. Hypocrisy.

A new study published by Cambridge researchers in Science Direct found that the environmental footprints and behavior of 300 conservationists were not materially better than those of a control group of 434 economists and medics. The scientists concluded that pro-environmental knowledge and activism had little impact on behavior. Hypocrisy.

The Silicon Valley elite give more lip service to diversity than the rest of the corporate world combined. Not only have those initiatives failed to improve the percentage of underrepresented groups in the workforce of tech companies, some of the biggest whiners ended up getting caught in their own duplicitous webs.

After having a complete meltdown on stage at a conference in Lisbon – dropping F-bombs for a full minute following the election of Donald Trump — 500 Startups founder Dave McClure was forced out of the company over sexual harassment and assault claims by numerous women seeking jobs and funding. Hypocrisy.

Engineer James Damore called out Google’s diversity and inclusion policies as “discriminatory,” “unfair” and “divisive,” blasting the company’s “politically correct” and “left-leaning” culture as unaccepting of anyone outside its “ideological echo chamber.” What did the search giant do? Fired him. So much for a supposedly open culture that encourages employees to question the status quo. Hypocrisy.

Don’t even get me started on politicians, leadership experts, self-help gurus and everyone else seeking fame and fortune by suckering the perpetually-distracted masses into buying whatever brand of snake oil they’re selling. Who ever thought duplicity would become a critical success skill?

Maybe I’m getting cynical in my old age, but it does seem that behind every public protest are hypocrites who privately benefit from it. And the level of hypocrisy is directly proportional to the volume of the outcry. Shakespeare was so right, but he never could have foreseen a media-crazed culture that rewards such revolting behavior.