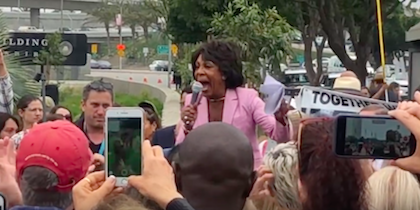 The recent wave of uncivilized public behavior isn’t just appalling. It isn’t just alarming. It isn’t just aggressive. It’s so much more horrific than that. One way or another, this will end badly. It will do harm. Big-time. And there’s only one way to change that outcome.

Consider long-time congressional leader Maxine Waters calling for supporters to publicly harass members of the Trump Administration, vis-a-vie the recent episode of White House press secretary Sarah Huckabee Sanders and her family getting tossed out of a Virginia restaurant:

Inciting public attacks on those with opposing political beliefs or on those who are just doing their jobs is ludicrous, uncivilized and dangerous. It’s a slippery slope. It will escalate quickly. And it will end badly. You’d have to be deranged not to see that.

If there’s a backlash, the exact same thing will happen in reverse. That will likely incite the other side to step up their actions. That could also result in a downward spiral that leads to a seriously fractured nation that makes today’s divisiveness seem civil.

And if people do nothing, that means we’re numb to this insidious nonsense. What happens when you leave unruly children unsupervised for too long? What do you think? They quickly degenerate into a frenzied mob. The same thing will happen here.

Related: Welcome to the Dark Ages 2.0

The most alarming thing about this unraveling of civil discourse is the way people are responding to it on social media. It’s beyond vitriolic. And it’s not just politicians and entertainers doing it. It’s you and me.

How far down that slippery slope does this take our nation? I don’t know and I don’t want to know. The only thing I do know is that it’s up to us — you and me — to change the outcome. And there’s only one way to do that. One word: Don’t.

No matter how much you despise President Trump or the other party, don’t get unhinged. Don’t retaliate. Don’t go numb. Whatever you do, don’t do it when people are off the clock, living their lives, minding their own business. In the context of legitimate political discourse, by all means state or debate your opinion, as appropriate. Then hug it out, go home and live your life. That’s the only way this can end well.

Don’t even get me started on the recent doxxing of ICE agents. There are laws against online harassment and threats. Maybe they’re not robust enough.

It’s hard to believe that it’s come to this. That someone should have to tell people how to act, how to be civilized in this day and age. That just shows how far we’ve already come down that slippy slope. This is where we are. And we must all do our best to ensure it goes no further.