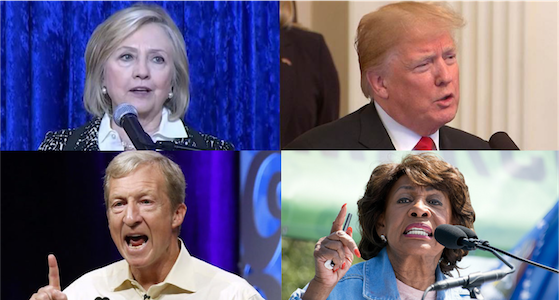 It’s one thing to play the blame game to avoid accountability, it’s another thing entirely to fan the flames of violence for political gain. That’s a game where everyone loses.

ICYMI, everyone is losing their sh*t over who’s to blame for the pipe bombs mailed to a who’s who of democratic party leaders and supporters.

The right says the left did this to themselves by calling for supporters to publicly harass members of the Trump Administration and GOP congressional leaders. The left says it’s President Trump’s incendiary rhetoric.

Everyone is pointing fingers at everyone else. On cable news. On Twitter. On all the news sites. In all the gazillions of comments and posts throughout the digital universe.

Related: Are We Going to Be Civilized or Uncivilized?

The same thing is happening over the Pittsburgh synagogue massacre, just as it did when Steve Scalise and Gabrielle Giffords were shot. Except in those instances the weapons were to blame as well. And if Cesar Sayoc had gone after his targets with an AR 15 instead of mailing pipe bombs, folks would be calling for a ban on assault rifles.

You know, I’ve been calling out dysfunctional business leaders for playing the blame game for eons but it’s worse in politics. The art of finger-pointing is practically blood sport in D.C. It’s been that way for a while, actually — since way before the Trump presidency. And the media is all too happy to keep feeding red meat to the digital drones on Twitter.

I suppose you can’t fault the virtual hordes for acting like whiny little children crying “but Mommy, he did it first.” After all, they see their business and political leaders doing the same thing every freaking day.

Related: America Uncivilized: This Can Only End Badly

It’s nauseating when leaders play the blame game to avoid responsibility; it’s much worse when they use such tactics to rally their base for political gain. And when they use violent tragedy as opportunity, that is unconscionable.

Now, I’m just going to say this once so I hope everyone is listening carefully: The only people to blame when something like this happens is the lunatic who pulled the trigger or mailed the bombs. Anyone who says otherwise is playing a dangerous blame game where everyone loses.

So how do we fix this chronically divisive and dangerous finger-pointing? I know what my mother would have said.

As a kid, I once had a fight with my best friend and went home crying to mom. “You should be the bigger person,” she advised, “and apologize to him.”

“He’s probably telling his mom the same thing,” she said. “Look, if neither of you apologize, you’ll both lose your friendship. Is that more important than your foolish pride?”

So I apologized to my friend and everything went back to normal. Lesson learned.

When will we learn?