Posted by Steve Tobak on December 26, 2018 in No Comments 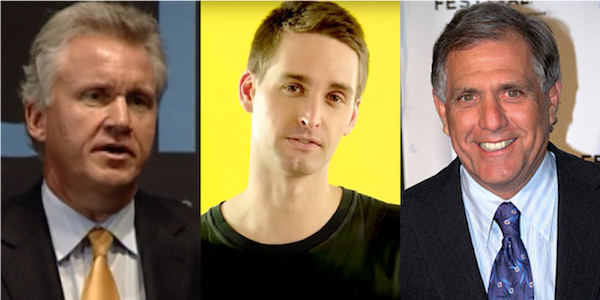 Every year, Santa and I get together at his place, break out the nog, boogey down to some righteous tunes like Joan Jett and the Blackhearts’ Little Drummer Boy and talk about corporate America’s naughtiest CEOs.

There’s not a lot we can do about their ludicrous compensation, but the fat man can’t resist filling their Christmas stockings with big black lumps of coal. I don’t blame the guy one bit. Those nasty bosses deserve every bit of it.

While Santa insists on keeping our methodology strictly on the down low, I can say we focus solely on chief executives of publicly-traded American companies. Even with that narrow scope, it always amazes me how many CEOs are naughty year after year.

Without further ado, here’s our Worst CEOs of 2018 list, counting down from …

The Dish founder once evoked Seinfeld to explain his seemingly nonsensical acquisition strategy: You never found out what an episode of the sitcom was really about until the last two minutes of the show. So, in terms of the company’s strategic direction, he said, “You’ll have to wait and see where it all comes together.” That was 2011. We’re still waiting. (Hat tip to CNBC). Don’t even get me started on his toxic leadership style. Shares have caved in since mid-2017 and are down more than 50% this year.

As I stunned Santa with tales that can turn your hair white (now you know what happened to him), I said, “Could this be the first time in seven years that the man who decimated Sears doesn’t make the list?” “Negative,” said the fat man. Lampert is finally putting Sears out of its misery, filing for bankruptcy in October. Shares now trade at a whopping 17 cents. The perennial “worst CEO” is threatening to buy the storied retailer out of bankruptcy through his hedge fund, but you’ve got to wonder, then what?

It’s tough when a founding-CEO shoots himself in the foot, but when he keeps doing it over and over, destroying his company’s value in the process, it’s hard to be sympathetic. First “Papa John” Schnatter said the n-word during a PR call. When HR tried to explain why that was bad, he said it again. Then he resigned. Then he walked it back. Now he’s working on a hostile takeover. All the controversy put off investors: shares are down 40%+ off their January high. Schnatter still owns 31% of the company. Time to walk away and find something to do that hopefully doesn’t involve pizza — or talking.

After a botched sale to Walgreens tarnished his image as a veteran supermarket/pharmacy dealmaker, it hardly seemed possible for Standley’s personal brand to get any lower. It did. This year he did it again, botching a sale to Albertsons as well. Analysts and investors have since lost faith in Standley and Rite Aid – shares are down more than 90% from their 2017 high.

Snap went out at $24 in 2017, hit an intraday high of $29.44 and has been plummeting ever since. Today shares of the social media company trade around $5, having lost 75% of their value following a string of missteps, including a widely panned redesign that had loyal users abandoning the site in droves. And the only people Spiegel has to blame are Mark Zuckerberg, who he snubbed in the early days and has been copying Snapchat ever since, and himself.

This is a first. Although he stepped down as CEO in August of 2017, Immelt is entirely to blame for the destruction of this once venerable industrial giant after drowning GE in debt and underperforming businesses. The company has shed three quarters of its market cap over the past two years and finally got booted off the Dow after a historic 111 year run. Immelt’s naughtiness knows no bounds.

While Santa and I agreed that Harvey Weinstein was 2017’s slimiest CEO, alas, the slime-ball was ineligible to make our Worst CEOs list since his company was privately held. But this year the #MeToo movement hooked a much bigger fish: CBS boss Les Moonves.

The vocal supporter of #MeToo (oh the irony) and network kingpin who successfully ran CBS for more than two decades was tagged with numerous credible sexual misconduct allegations. Moonves was forced to resign but the board ultimately terminated him for cause, denying a whopping $120 million severance package in the process.

If he’s smart, Moonves will let it go at that and count his blessings that he’s still a free man. It could be worse; the creep could be having done to him in prison what he reportedly did to all those women in his office with the remote door-lock button under his desk. Yikes.

Note: I’m guessing some of you are wondering why Elon Musk didn’t make the list. In spite of all his loony antics, Musk did manage to deliver the Model 3 — albeit late and pricy as usual — and shares of Tesla are still bouncing around the same neighborhood they started the year in. That said, we’ll be watching him in 2019, that’s for sure.