Posted by Steve Tobak on February 24, 2019 in No Comments 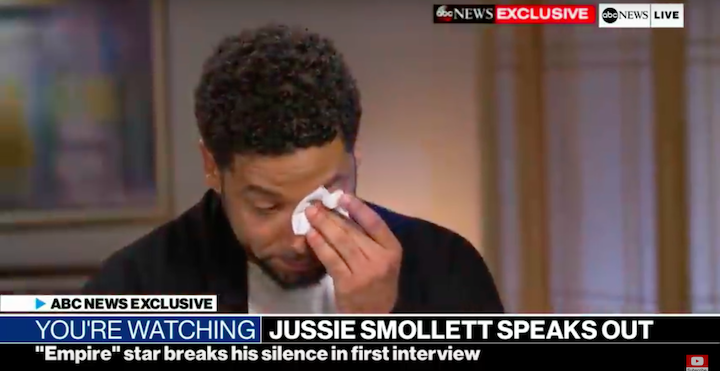 Thought I’d get the last word on the Jussie Smollett case. JK. This story’s got legs a mile long – the media’s not even close to milking it dry. And if the FBI and U.S. Postal Service find the threatening letter he received at FOX Studios was also a stunt, the actor could be on the hook for federal as well as state criminal charges.

Just when you thought you’ve seen every possible take on the Smollett hate crime hoax, here’s mine, not that anyone asked:

Some say he’s a troubled guy who needs help, not jail time. Know what I say? It’s called crime and punishment, not crime and therapy. Besides, the debate over whether the actor should do time is for the prosecution, judge and jury, not the media, the twits on Twitter — or me for that matter. 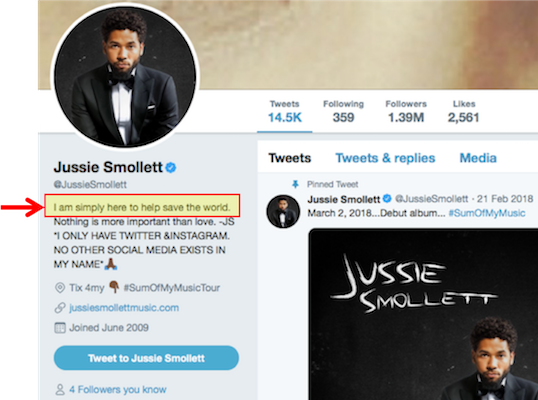 ICYMI, the Chicago police chief said Smollett did the victim stunt to boost his notoriety and career to make more money. In other words, our crazy culture rewards fraud and victimhood, as long as you’re a protected minority and good at it. You know, like Al Sharpton.

Why am I not surprised that some in the media are still finding ways to blame the actions of one selfish, greedy, entitled narcissistic creep on President Trump. Trump Derangement Syndrome lives on, and on, and on, …

Another child actor self-destructs. Sort of eerie how common that story is. The only things missing are the drugs and, well, if it were me I’d put the guy on suicide watch. I’m just sayin’.

Interesting tidbit: Practically the entire Smollett clan are actors/activists. That’s quite an intersectional pedigree. It also explains why Jussie might have thought he’d get away with such a boneheaded plan. Seems he took Shakespeare’s “All the world’s a stage” a bit too literally – and spent way too much time with Sharpton. 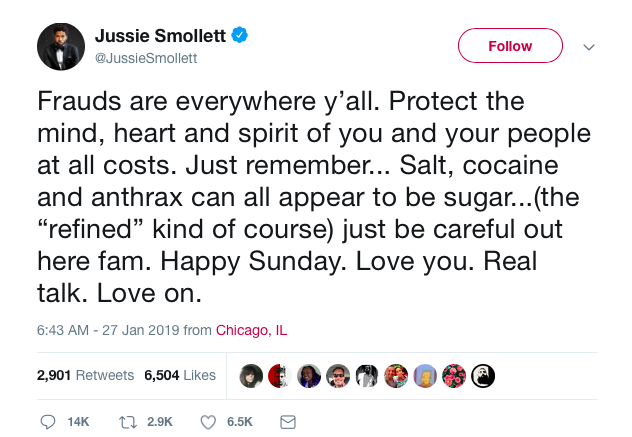 Speaking of William S., a few weeks ago Smollett tweeted, “Frauds are everywhere y’all.” Does “The lady doth protest too much, methinks” come to mind? Funny how so many frauds are the same sanctimonious hypocrites who rail against frauds. Maybe they’re just PO’d that someone else got in on their scam.

And get this: His Twitter profile quotes himself (a pretty definitive narcissistic tell) saying, “I am simply here to help save the world.” Sure. And who’s going to save the world from you?

I don’t know; I’m pretty much over all this hate crime identity politics BS. If only the media, the politicians, the activists and Hollywood would get on board and get real we can bring at least that aspect of this loony culture of ours back to some semblance of normalcy. Never mind, I can see how silly that sounds.