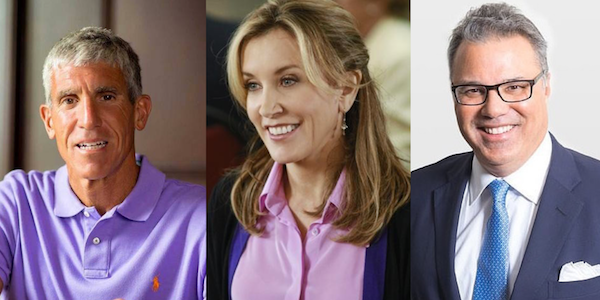 This is what we’ve come to. The massive college admissions scandal rocking the nation is like a filthy, slimy window into the dark side of our entitled culture. Dozens — before the dust settles maybe hundreds — of rich, coddling parents bribing their precious snowflakes’ way into elite schools like Stanford and Yale. They’ll be writing books and mini-dramas about this for a long, long time.

If you’ve been off-planet and need background, Google it or click here. Of course the media predictably focuses on the Hollywood actresses named in the indictment but what about the dozens of CEOs and business leaders charged? Some have already lost their jobs. That’s a good start if you ask me.

You know the phrase “so much to unpack here?” Well I hate that phrase but in this case it’s true. Here are my observations on the whole sordid mess.

First off, this is a really big deal, and not just in terms of the scope of the fraud and the number of elite schools and people involved – 50 individuals were criminally charged and that may just be the tip of the iceberg. What troubles me is how well the scam worked. It’s absolutely nuts how many people with that kind of admissions power at elite schools are so easily bribed.

It’s hard to believe that dozens of candidates can simply get walked in the door of top-rated schools like Stanford and Yale as athletic recruits without any real scrutiny of whether they actually played the sport they were supposedly being recruited for and whether their grades and test scores were legit. There was apparently no oversight whatsoever, at least none that wasn’t bought and paid for.

You know how I’m always railing about the unintended and yet entirely predictable consequences of coddling in our culture? This is parental coddling on steroids. I’m sure some of these kids have never had to lift a finger to compete or better themselves. Parents cheating their kids’ way into college further reinforces that they’re special snowflakes and don’t have to try. That dooms them to a sad life where nothing matters but material things and their own entitled self-centered selfie-taking asses.

I mean, have you seen the YouTube clip of one of the Hollywood kids saying, “you know I really don’t want to go to college, I just want to go to the parties and college game days.” Keep in mind that she got in while someone else didn’t.

Sadly, the immoral, illegal and despicable acts of some privileged elites will further fuel the white privilege identity politics narrative that’s spreading throughout our culture like a flu virus. Never mind that most successful people started with nothing and worked their tails off to get where they are. Don’t confuse salacious sensationalism with facts.

On the other hand, there were lots of female names on the list of indictments, so at least no one can legitimately hang this on toxic masculinity, although I’m sure plenty will try anyway.

Why is it not surprising that many if not most of the elites involved are in California? Because people in New York are too savvy to get caught. Sorry, had to say it.

Come to think of it, I’m not sorry. Since I grew up in Brooklyn and have lived most of my adult life down in SoCal and up here in Silicon Valley, I have to say it’s true. Folks on the left coast are far more entitled and less savvy than their counterparts back east. At least that’s my observation. After all, the Golden State is the original nanny state, is it not? And you know what they say, as goes California so goes the nation. That’s certainly the way it’s unfolding. I mean, Hillary Clinton didn’t even think she had to campaign anywhere else to land in the White House. Surprise. Turns out there’s a hell-of-a lot of space and a whole mess of people from sea to shining sea.

Big win for the FBI and the Justice Department. They can really use it after all they’ve been through since self-righteous James Comey ran the bureau. On an unrelated side note, how is it that one of the most powerful partisan political media outlets in the nation, Media Matters, is still a 501(c)(3) nonprofit? That is against the IRS rules, you know. I’m just saying.

Meanwhile, Yale’s president said in a statement, “The corrupt behavior alleged by the Department of Justice is an affront to our university’s deeply held values of inclusion and fairness.” This has to be some sort of sick joke. If there’s a pinnacle of elitism and privilege, Yale is right up there. “Inclusion and fairness” my ass.

In announcing the federal charges U.S. Attorney Andrew Lelling said, “For every student admitted through fraud, an honest and genuinely talented student was rejected,” adding, “There can be no special college admissions system for the wealthy and I would add that there will be no separate criminal justice system either.” I hope he’s right. Everyone involved should see the inside of a jail cell and cough up big bucks.

Finally, the mastermind of the scam was William Rick Singer from Newport Beach. Singer, who executed all the bribes, fake SAT/ACT scores and phony athletic recruit admissions, made $25 million off the elite coddling parents. The slime should have to cough up every penny, which should then be turned into a fund for the students admitted in place of the entitled elites’ dumbass kids. They should lock him up for a long, long time.

Singer apparently set his scheme up as a nonprofit so his clients could declare his fees as charitable donations. I’m sure the IRS will want to audit everyone charged.

P.S. Just heard that Singer is singing to the Feds — says he ran the scam with more than 750 families. More to come indeed.