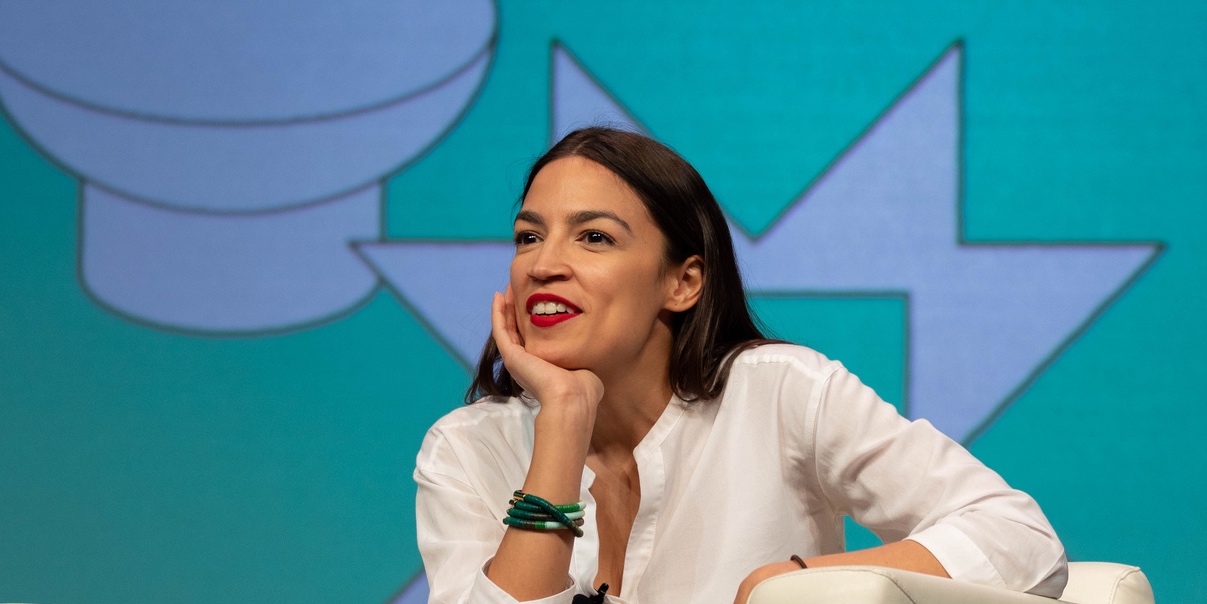 You know it galls me to see grandstanding politicians like Maxine “We Have God on Our Side” Waters and her capitalism-hating cronies grill CEOs on Capitol Hill. Maybe nauseates is a better word.

Say what you will about some of the scandals that have befallen Wells Fargo in recent years, you know chief executive Tim Sloan would say or do just about anything to get the bureaucrats in the Democrat-led House Financial Services Committee off his back and avoid the fate of his predecessor, John Stumpf.

Don’t get me wrong, I strongly believe that CEOs should be held accountable, and I’ve certainly done more than my part to do so over the past decade or so. But some of these Congressional hearings are more like gang rapes than genuine Q&A. I don’t even know why they’re calling hearings – they’re more like one-sided rantings and ravings.

On Tuesday, however, we were at least treated to a little comic relief from Alexandria Ocasio-Cortez, whose Green New Deal crazy train seems to have left Utopia and arrived in Cluelessville, where she encounters an increasingly bewildered Sloan.

While accusing Wells Fargo of financing “human rights abuses and environmental disasters,” the freshman rep from N.Y. sounded absolutely clueless about how culpability works in the U.S. justice system, not to mention that she had a little trouble getting her facts straight (check out the video below).

Sloan: “I don’t know how to answer that question because we weren’t.”

When the caged children at the border angle didn’t pan out AOC turned to the subject of oil pipelines, since Wells Fargo was one of 17 or so banks that financed the Dakota Access pipeline which is owned by Phillips 66 and runs 1,200 miles through North and South Dakota, Iowa and Illinois.

AOC: “Should Wells Fargo be held responsible for the damages incurred by climate change due to the financing of fossil fuels and these projects?”

Sloan: “I don’t know how you’d calculate that.”

AOC: “Hypothetically, if there was a leak from the Dakota Access pipeline, why shouldn’t Wells Fargo pay for the cleanup of it, since they paid for the construction of the pipeline itself?”

Sloan: “Because we don’t operate the pipeline. We provide financing to the company that’s operating the pipeline.”

In all seriousness, activists have in recent years taken to shaming banks, fintech companies and other lending institutions that provide financing to companies they consider to be on the wrong side of their countless environmental, human rights, gun violence and other loony causes.

I say “loony” because most of the time the activists get it wrong with hot-takes on breaking stories that have yet to be fully vetted or are based entirely on dubious or partisan sources. That never seems to stop them from ginning up the social media mob to call for boycotts and all that.

And the masses are so distracted, easily fooled and politically divided that oftentimes the tactic actually works. More and more CEOs simply give in and cave to the mob rather than stand up for what’s right and risk more pain and a possible crisis down the road. It’s downright discouraging.

Now you know why I’m starting to sound a little melancholy about the future of capitalism in America. On the other hand we do live in a nation where the prevailing political winds seem to shift every eight years or so. With socialism on the rise I’m almost tempted to watch a socialist government fail spectacularly so we can put a stop to that nonsense and get on with life in the real world. I say almost.