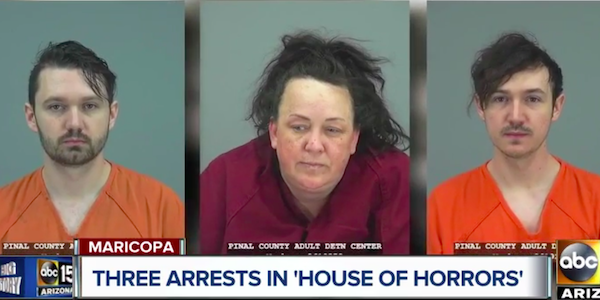 There is something seriously wrong with the way our crazy culture incentivizes people who can and should be doing meaningful work to stay out of the workforce, milk the system, and do incredibly dumb stuff that makes them internet sensations and megabucks. In some cases, evil, criminal stuff.

Machelle Hackney has been arrested and charged with allegedly abusing and in my view torturing her 7 adopted children and keeping them out of school for years to act in her YouTube channel, Fantastic Adventures, which has 800 thousand subscribers and 250 million views since it launched in 2012.

In today’s bizarro world Hackney was viewed as an entrepreneur who found an innovative way to work the system that pays people to adopt children and use them as slave labor with no oversight whatsoever. And Google/Alphabet’s YouTube isn’t just complicit – it made her rich and famous.

Never mind that her innovation included chronically beating and pepper spraying her adopted children, forcing them to take ice baths and locking them in closets without food, water or bathroom access for days at a time as punishment for flubbing their lines and whatnot.

Last I checked her YouTube channel was still up, meaning Hackney is still making money off it and she’s been released on $200K bond, although the children are in Arizona police custody. Her two adult sons were apparently complicit in the sick scheme and were also arrested and charged.

Meanwhile social media influencer is now a career, and a lucrative one at that. And this goes way beyond the Kardashians and Jenners, mind you.

You know that massive college admissions scandal that went down last week? Actress Lori Loughlin and her husband, fashion designer Mossimo Giannulli, payed half a million bucks to get their two girls into USC as crew team recruits. The girls have never rowed a boat in their lives, but that’s neither here nor there.

Apparently the younger daughter, 19-year-old Olivia Jade, never wanted to go to college in the first place – except of course for the parties and stuff – because it would conflict with her growing career as a social media influencer. No kidding – her YouTube channel has 2 million subscribers. Her Instagram account has 1.4 million. And so on.

And now there are states and cities experimenting with the idea of paying people a monthly income to do absolutely nothing. No means testing. No special needs. Just cut them a check every month, courtesy of the taxpayers. Some Democratic Presidential candidates want to do that nationwide.

To make money as a criminal you used to have to rob a bank or something. Not anymore.

Now here’s a pop quiz for you guys:

You just can’t make this stuff up, folks. Comments?