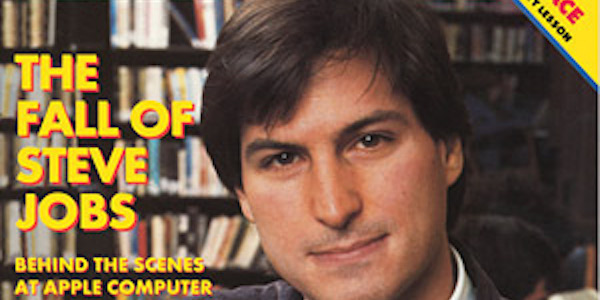 “Getting fired from Apple was the best thing that could have ever happened to me.” – Steve Jobs

Very few people lead charmed lives. Careers, even great ones, almost never shoot straight up and to the right. Instead, they behave a lot like roller coasters, reflecting the ups and downs of eventful lives. And if you take a snapshot at any point in time, the ride may very well look like it’s going to crash.

Show me a great executive or business leader, and I’ll show you someone who has experienced disaster. It comes with the territory. That’s because successful people don’t do things halfway. They’re not timid. They go all in, take big risks and fight like hell to win. And sometimes they lose, big time.

I failed to turn around a high-tech start-up and filed for Chapter 7 bankruptcy. I’ve bombed some critical presentations and launched products that flopped miserably. I’ve lost long battles for big customers. And I’ve been fired a couple of times — from senior executive positions of public companies, no less.

To say those experiences were unpleasant would be a ridiculous understatement. They were gut wrenching. And the public failures were humiliating. They tested my strength, my will and my self-confidence. And each and every time, it took a while to get up, brush myself off, and bounce back, but I always did. I always survived to win or lose another day.

You see, when you’re young and that sort of thing happens you think you’ve blown it. You think your life is over. You think you’ll never come back. But after you live through it a dozen times or so, a pattern emerges; a roller-coaster pattern.

“When you have a powerful desire to win but you’re no longer afraid to lose, that’s when life gets a lot easier.”

Once you begin to realize the inevitability of that pattern, a funny thing starts to happen. Defeat still hurts, but you know you’ll get through it and be better for it. You realize that what they say is true. That what doesn’t kill you really does make you stronger.

When you have a powerful desire to win but you’re no longer afraid to lose, that’s when life gets a lot easier. You look back and realize that you never actually lost the fearlessness of youth. It just turned into a somewhat less frenetic fearlessness of experience and maturity.

The most important thing is that you keep on riding that roller coaster–and enjoying the ride.

A version of this originally appeared on inc.com / Hat tip to Joan M. Redwing