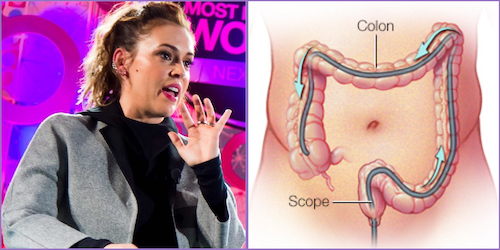 Just came out of my third colonoscopy. Still pretty hopped up on some badass narcotics and thought I’d share the joy with all of you. The joy, of course, is that it’s over. Also I can eat again after nearly two days of liquid diet and I can actually fart without fear of having an accident.

Also did I mention the drugs?

If that’s too much information for some of you, you’ll understand when you go through it yourself. Best thing about it is that the SUPREP you have to take to cleanse your GI tract is not nearly as vile-tasting as it used to be and you only have to down a quart of the stuff instead of half a gallon, thanks to the good folks at Braintree Labs.

What I don’t get is how many idiots – I mean besides Twitter/Square CEO Jack Dorsey and probably half the loons in Hollywood – voluntarily put themselves through this sort of self-torture. And not to check their colons for cancer, either. They routinely fast and flush to cleanse themselves of imaginary toxins. What a bunch of dopes.

Once every three-to-five years is plenty for me, thank you very much (hat tip to Bob M for the South Park Lemmiwinks reference).

One more thing. While I was waiting for the procedure I read about Alyssa Milano’s dumbass (even for her) #SexStrike over fetal heartbeat anti-abortion legislation in several states. What that’s got to do with women withholding sex from their mates and themselves is beyond me.

Our reproductive rights are being erased.

Until women have legal control over our own bodies we just cannot risk pregnancy.

JOIN ME by not having sex until we get bodily autonomy back.

After that I couldn’t wait for the colonoscopy.

“If Milano is really as concerned about women’s ‘bodily autonomy’ as she claims to be, then maybe she should start by not telling other women what to do with theirs.” https://t.co/RDekQ4c1Qr

Also did I mention the drugs?

P.S. Next week I have jury duty. As long as the case doesn’t involve colonoscopies or Alyssa Milano I should be fine.