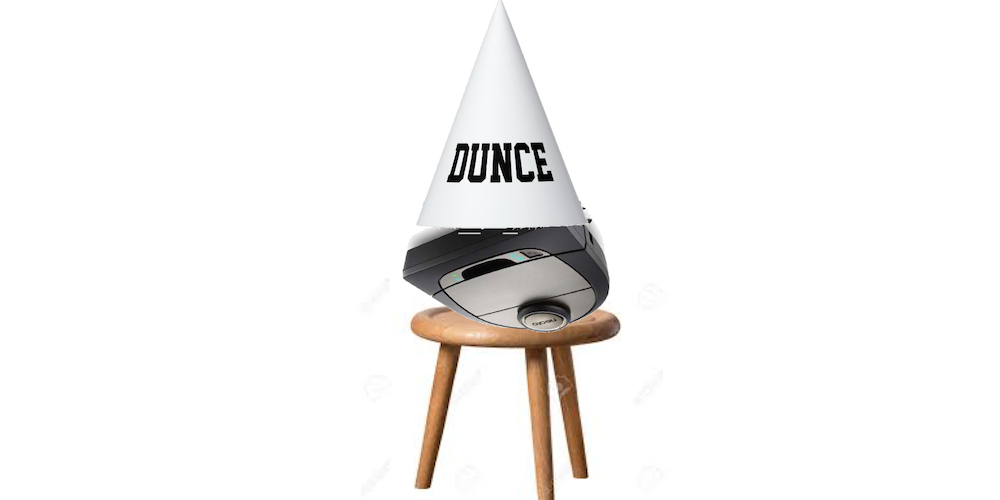 AI. Smart machines. Smart everything. It’s all I hear about.

In reality, machines aren’t nearly as smart as the media hype makes them out to be.

Take robot vacuums. Everything you read makes it sound like they take all the hassle out of house cleaning. Just buy them, download the app, program them and forget about them. Clean house. End of story.

What a load of BS. Depending on the size of your home and how you furnish it, these machines can be far more trouble than they’re worth.

After resisting for years I did all the research and finally sprung for what the reviews said was about the best machine on the market – the Neato D7.

I was proud of my first robot. I named it Micky. That was the best day of my robot experience. An even better day will be the day I take a sledge hammer and smash Micky into a thousand pieces.

You see, I don’t think Micky was the brightest machine in the factory. It might, in fact, be brain damaged. Or maybe they’re all like that. Honestly, I haven’t a clue. All I know is, the AI robot revolution isn’t all it’s cracked up to be.

Here are some of the issues nobody tells you about:

Micky gets stuck on floor heat vents, which we have in every room. I get it unstuck and watch as it turns right around and tries again and again to go over the same spot over and over. I can respect a machine for being fastidious but doing the same thing over and over and expecting a different result is just plain dumb.

Maybe my expectations were too high, but I thought “learning” meant, well, learning. Micky doesn’t learn. It just makes the same dumbass mistakes over and over. And it doesn’t dust my floors any better today than it did the first time.

If you have lightweight rugs or rugs with tassels, better roll them up and put them outside. Same goes for chairs, bar stools and anything with legs that the machine can’t fit through. Ironically, those are the same places where dust tends to accumulate. Go figure.

If someone in your family has a habit of leaving shoes, clothes or toys laying around on the floor, you’ve got to pick all that stuff up before even thinking about turning on the machine. You’ll also have problems with wires, cords and water bowls for your critters.

If your home has two or more levels, you either need two machines or you have to move the thing every time. Stairs? Got to do those by hand. Same goes for sharp angles, coves and under houseplants on raised stands.

What about the much-promoted mapping capability — so you can simply program the machine where not to go? That works in theory, but if you have a big house with any Wi-Fi gaps, you may have connection problems and the mapping will fail. I’ve had Micky for nearly two years, spent countless hours with tech support and still haven’t gotten a solid map that I can use to program the thing.

Depending on the size of your house, you may also have to empty the machine’s dust bin and free the rotating thing (whatever that’s called) of hair multiple times. Also the sensors get dusty and figuring out what’s wrong can take a while. The machine may also have to charge itself at least once before the job is done. That takes hours.

It can actually take almost an entire day to do what a human can do in an hour or so. And you’re always on call for all that on-the-job maintenance stuff.

Probably the biggest issue is that your floors aren’t the only surfaces in the house that need dusting or vacuuming. If there’s visible dust on your floor, I guarantee it’s also on everything else. I mean, what’s the point of keeping the floor dust-free if you’ve got dusty furniture, tables, baseboards, light fixtures and ceiling fans. Not to mention dirty counter tops and cobwebs all over the place.

Guess I just don’t see the point in vacuuming the floor until you’ve done all that other stuff first. Then washing the floors afterwards.

I could go on but you get the point. Honestly, I wish I’d never bought the thing.

When it comes to machine learning, I think the term “smart” is a big stretch. In reality, machines are not as dumb as they used to be and just smart enough to be dangerous — or at least royal pains in the ass.