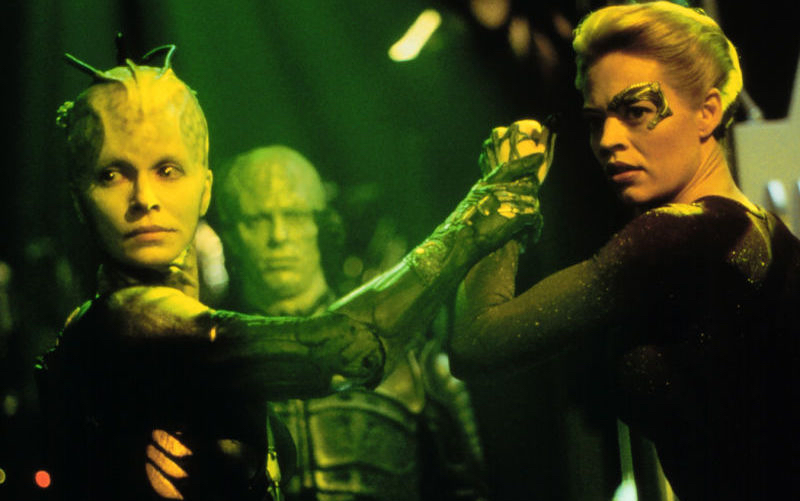 Think about it. Surgically implanting thousands of electrodes so your brain can connect directly to the internet through a high-bandwidth USB-C port. Sure. Sign me up. I mean, what could possibly go wrong?

Anyhow it seems like a good time to dust off an old post — with what still might turn out to be a prescient prediction — from when I used to write for CNET back in 2008.

Q: How did the Borg – the not-so-lovable cyborgs from Star Trek – get to be that way?

A: It all started with Bluetooth headsets.

I see more and more people walking around with Bluetooth headsets lodged behind their ears every day. Most states are passing hands-free laws for drivers. Even my technophobe wife wants one.

I could be wrong, but I think it’s only a matter of time before some enterprising startup comes up with an implantable device.

Not being a biotech guy, I’m not really equipped to judge the biological challenges of such a thing. But on the tech side, the only significant problem I can think of is designing it to be upgradeable so you don’t need surgery every time the standard is updated or, God forbid, there’s a new standard.

I guess a smart card slot or something similar might do the trick.

As for the demand side of the equation, here’s what I’m thinking. Lots of people seem to be willing to go under the knife for elective cosmetic surgery. Who would have thought there’d be so many vain people? I’ve got to believe there are at least as many folks who are pragmatic, efficient and geeky to the point of undergoing a little snip snip or nip tuck or whatever they call it.

If the device is well-designed, the procedure is relatively safe, and the whole package isn’t too pricey, voila, you’ve got a market.

And that’s just the beginning. I can envision an entire line of implantable products, from Bluetooth and Wi-Fi transceivers to language translators and heads up displays. How about DC power plugs? What, you didn’t know that people can generate their own electricity? Isn’t that what the bad guys did with the entire human race in The Matrix?

Where will it all end? I don’t know, maybe combining cosmetic surgery with techno-implants to create human advertisements. How much would it take to turn you into a walking iPhone?

Mark my words: the geeks of today will be the Borgs of tomorrow.

Resistance is futile. Have a great weekend, kids!