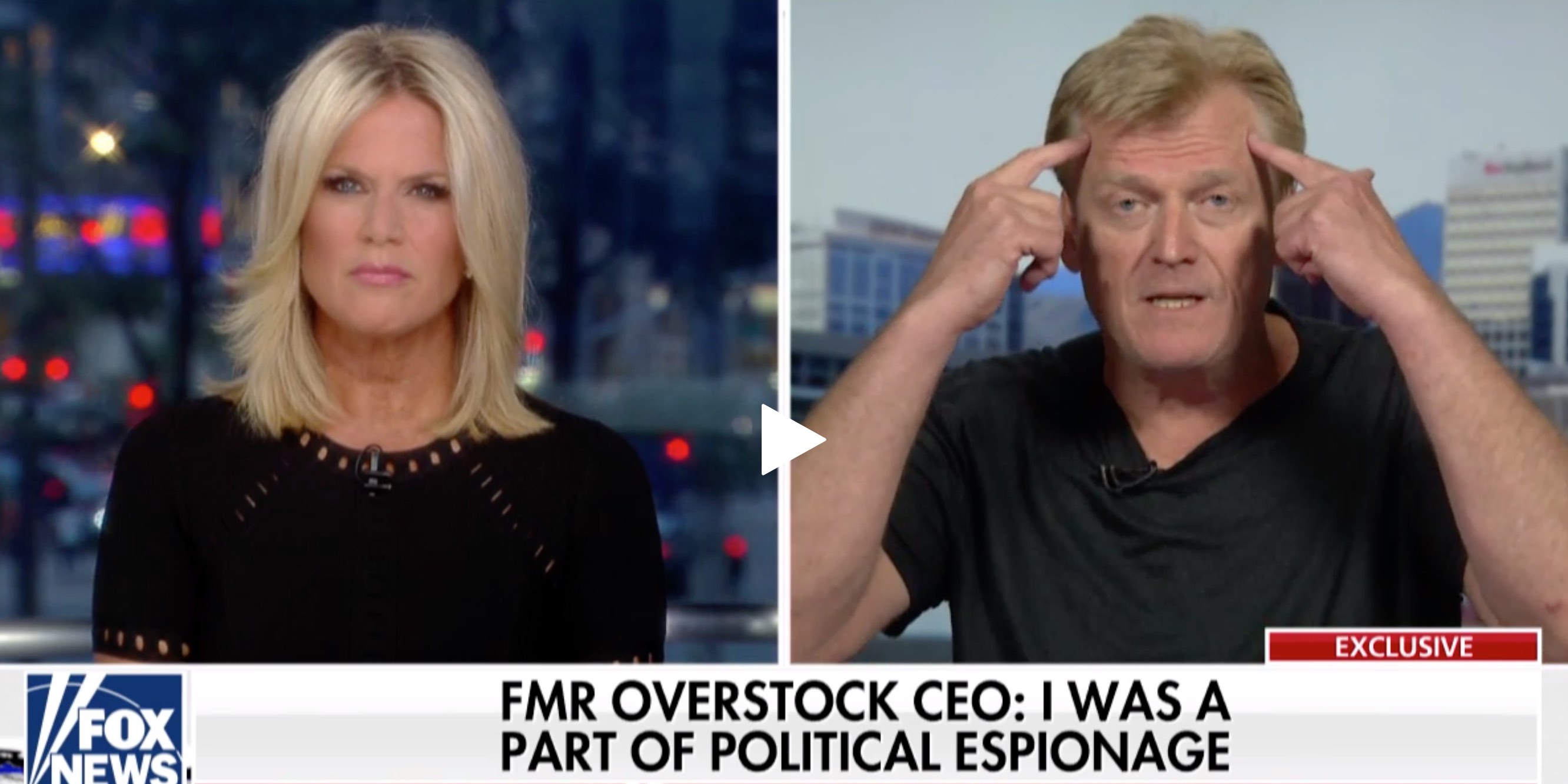 I could go on but what would be the point? Last week’s incredible story by Overstock founder and former CEO Patrick Byrne (no relation to David Byrne of Talking Heads) has practically all those theories wrapped up into a real life, deep state, Russian collusion version of “The Secret Life of Walter Mitty.”

The question is, is the guy for real or a raving lunatic with an overactive imagination?

Byrne, who resigned as CEO of Overstock after 20 years last week, says he was recruited by the “deep state,” aka “the men in black,” through FBI officials James Comey and Peter Strzok, to have a sexual affair with Russian spy Maria Butina as part of FBI probes into Hillary Clinton, Donald Trump, Ted Cruz and Marco Rubio. He claims to “have all the answers” on the Russian collusion hoopla and says he’s turned everything he knows over to U.S. Attorney General William Barr.

In a Fox Business interview Byrne said it was all political espionage. “There is a deep state like a submarine lurking just beneath the waves, and a nuclear icebreaker named the USS Bill Barr has snuck up on them and is about to ram them amidships. That’s about to happen, and I think we’re about to see the biggest scandal in American history as a result,” he said. “Everything you think you know about Russia and Clinton investigations is a lie, it’s all a cover-up, it was all political espionage.”

Byrne has led an interesting life. His father was chairman of Berkshire Hathaway’s GEICO. He has a BA from Dartmouth, a master’s from Cambridge and a PhD from Stanford. He’s a martial arts blackbelt. He survived (so far) testicular cancer and Hepatitis C. He’s also a block chain fanatic who thinks cryptocurrency will change the world. Why am I not surprised?

Then again, he’s been right before. Sort of. About 15 years ago he believed that Wall Street hedge funds, investment banks, the SEC and Eliot Spitzer were all out to destroy Overstock through naked short selling. At his direction Overstock sued a hedge fun, a research firm and some big banks, obtaining settlements from most, which would seem to indicate that he may have been at least partially right. Go figure.

Actually there is precedent for this sort of thing. Remember the Gong Show’s Chuck Barris? He claimed he was a CIA assassin in his memoir “Confessions of a Dangerous Mind.” George Clooney actually made it into a movie starring Sam Rockwell.

Byrne ended the FN interview with this, “You want to see a former FBI director crap his pants?” he said, “Stick a television camera on Peter Strzok or James Comey and say the name Patrick Byrne.”

Can’t believe I’m saying this, but Comey does make a good point. You want an operative to be invisible, not a high-profile CEO with a Walter Mitty complex. It really doesn’t make any sense.

So, was the FBI’s Russian collusion probe a deep state plot by rogue Obama Administration officials, or is the former CEO a delusional wacko? Or both?