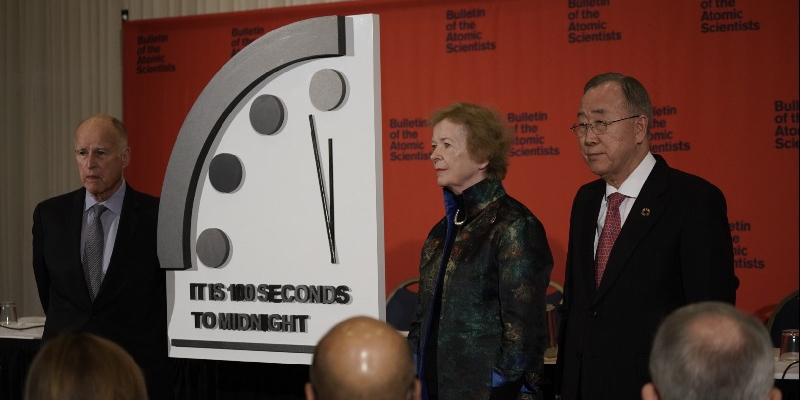 The hashtag #DoomsdayClock has been trending all day on Twitter.

Wait, you mean you’ve never heard of the famed Doomsday Clock? Join the club. I hadn’t heard of it either, until today, that is. Or maybe I have but it was so traumatizing that I blocked it out. Or maybe I found it to be so ludicrously trite and tedious that I forgot about it 5 nanoseconds after I heard about it. Whatever.

In case you’re wondering, in 1947 some atomic scientists started a bulletin – the Bulletin of the Atomic Scientists, they called it – and created the clock which, according to Wikipedia, is “a metaphor for threats to humanity from unchecked scientific and technical advances.”

That used to mean nuclear holocaust but of course now it includes climate change armageddon. Of course it does.

According to the clock metaphor, global catastrophe is midnight and today the keepers of the clock moved it 20 seconds closer to midnight, from 120 to 100 seconds. Of course this is all very scientific. Or not.

Alright scientists, I need to see your math here? Why a 20 second change? How much potential destruction does one second hold? https://t.co/hLdD6rbwOQ

Curious about who runs this obscure 73-year-old publication that also happens to be “the keeper of the internationally recognized Doomsday Clock” I’d never heard of, I checked out their website. Yes, they do have one. And every page has “It is 100 seconds to midnight. Learn why” across the top. You know, in case anyone missed the huge D.C. news event where they spent an hour and a half explaining why they moved the clock 20 seconds to a room full of about 12 people who looked bored out of their minds.

Turns out that both the current president and CEO, as well as the previous executive director and publisher (same job, guess they changed the title of the non-profit’s boss to, you know, appear more important), have graduate degrees in, wait for it, political science. The editor-in-chief’s graduate degree is in public administration. And so on down the masthead.

Not a physics nerd, geek or propeller head in the bunch. Not one. Now there’s a shocker.

Guess I’d call this global climate hysteria at its best, but you know nobody will ever beat Rep. Alexandria Ocasio-Cortez’s “The world is going to end in 12 years if we don’t address climate change” by getting rid of all the cars, planes, furnaces, cheeseburgers and farting cows destroying the planet.

12 years. 100 seconds to midnight. I mean, what’s the difference when you’re talking human extinction and world apocalypse? To the fearmongering, grandstanding, attention-grabbing, vote-seeking, self-aggrandizing, power-grabbing socialist bureaucrats looking to reengineer the free world in their own image? Not much.