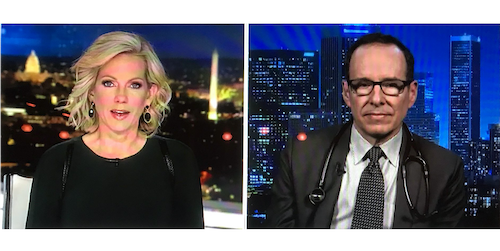 After watching our favorite new show (new to us, anyway), Bad Girls, the wife puts on Fox News. I pour us some more chardonnay before heading down to the dungeon to work. On my way out, I catch a clip of a doctor talking coronavirus with Shannon Bream.

I’m instantly struck by the doctor’s finely tailored suit, freshly ironed shirt and fashionably matching tie with a perfect knot. Did I forget to mention that he’s also wearing … a stethoscope?

Like the rest of his impeccably pressed and fashionable outfit, the doc’s stethoscope is black. Even his glasses are black. So is his thinning hair, which appears to be dyed.

You’ve got to admit, that was a nice touch. I mean, never mind the caption beneath his image – how would anyone know he’s a doctor without the stethoscope? Seriously.

Is it wrong for me to be disgusted by all the shameless opportunists – pundits, activists, politicians, and yes, even doctors – desperately struggling to get something out of the latest world crisis for themselves?

Okay, so maybe I’m a little jaded about this. Overly cynical, perhaps. Maybe the good doctor just likes to dress nice. Maybe he likes black. Maybe the stethoscope – aw crap, who the hell am I kidding?

The guy Ubered to the studio, got his bright spots powdered and what’s left of his hair combed over by the makeup people, and got in front of the camera with a stupid matching stethoscope around his neck so he’d look important. Credible. Special. Whatever.

So maybe my 15 minutes of fame was so long ago that Jurassic Park was a documentary. Still, I’ve been there, done that. I know how this stuff works. And for the record, I didn’t give a rat’s ass what I had on. The flacks did, but not me. I was just doing my job, which at the time included promoting a product that took the tech world by storm. Back in the jurassic age.

But that’s neither here nor there.

So, how am I protecting myself from the coronavirus? Pretty much business as usual except for a little hand sanitizer in the car and an extra scotch at night … just to be safe. Also hand washing, no nail-biting, yada yada.

Still doing face-to-face meetings and going out to eat and whatnot, but nixing on a concert this Saturday. It’s not the virus that concerns me, but the prospect of a long and boring quarantine. I’d go out of my freaking mind.

Also the wife doesn’t want me to go. Considering that she has left me twice, threatened the big D I don’t know how many times and called me things that would make a gangsta duck for cover, I found her concern to be quite touching.

Actually she just doesn’t want to have to take care of me. Who can blame her? I’m a real handful when I’m sick. Worse than usual.

Anyhow, be well, people. And whatever you do, don’t panic. There’s no reason to panic. A few months from now this’ll all be over and we’ll all be asking ourselves what we were so freaked out about. No kidding.