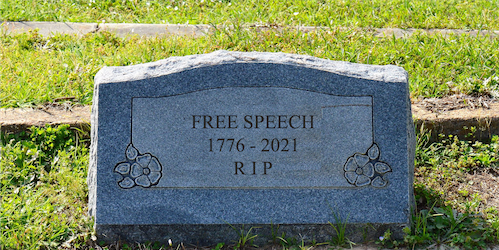 Now that Facebook, Twitter, YouTube and pretty much every other social media app has officially nuked Donald Trump, countless supporters of the soon-to-be former President are posting and tweeting about the injustice of it all, urging their followers to cancel whichever app they happen to be on.

I get the tweets to Twitter boss Jack Dorsey but please tell me you see the irony of #canceltwitter trending on Twitter. I so want to believe there are still some intelligent people left on this god-forsaken planet.

At least GG had the good sense to just say adios and be gone.

this redefines who the true rebels are.

On the plus side, any diehard American who still believes that free speech has a snowball’s chance in hell of surviving cancel culture can always go to Parler. Oh, wait. Amazon, Google and Apple have all booted Parler off their services. Never mind.

Everywhere I go, everyday people who can still think for themselves are struggling to make sense of the senseless — the unthinkable notion that big government and big tech are now moving in lockstep to squash free speech. The drumbeat is deafening.

Yes, I realize they’re after hate speech, but here’s the thing. Hate speech is and should be protected speech. Isn’t that the whole point of free speech? Viewpoints are subjective. One person’s hate speech is another person’s opinion. I mean, that’s what the First Amendment is all about.

Once you start banning some people, tweets, whatever, it’s a slippery slope. Look out below.

Remember the summer of BLM riots across the nation? Left-wing media commentators condoned months of lawless looting, burning and murder with lines like, “Who ever said protests had to be peaceful?”

Insane calls to defund police followed, leading to big upticks in violent crime in many inner cities. And few if any perpetrators of those crimes were ever prosecuted.

There was no banning or canceling of BLM or anyone else inciting racial violence and deadly riots, now was there?

But one incident on Capitol Hill leads to a complete media and social media ban of President Trump and many of his supporters, not to mention another impeachment and criminal indictments.

Never mind hate speech — violence, crime, even murder are fine, as long as they’re in the name of identity politics and progressive policies. The left’s hypocrisy knows no bounds.

In case you’re wondering what’s going on here, let me fill you in. Silicon Valley is a bubble. A one party echo chamber. Virtue signaling is the norm here. Confirmation bias gone wild. But there’s something else going on here. Something far more insidious.

Once the federal government started amping up the rhetoric and finally suing big tech to break up their monopolies, the path forward became clear: Silicon Valley is now moving in lockstep with the left to keep from being chopped up into pieces and regulated out of existence.