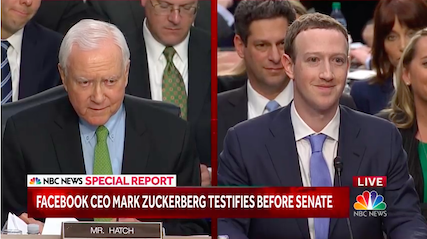 The way everyone’s eyes are glued to some screen or another, hands ready to tweet at a moment’s notice while Facebook CEO Mark Zuckerberg gets grilled on Capitol Hill, you’d think this is some sort of existential crisis for the social network. You’d think these hearings are important.

It’s not. They’re not. Not even a little.

There’s a good reason why shares of Facebook went up 4.5% on heavy trading during Zuck’s Congressional testimony today.

It certainly wasn’t because America’s favorite boy robot gazillionaire did such a bang-up job. I mean, he did alright, if you make believe he didn’t use the words “senator” and “in general” in every sentence.

It was because the smart money realizes that this whole Cambridge Analytica data breach, scandal or whatever you want to call it is just a big juicy nothingburger, as I explained when the news broke. We have simply moved on from media hype to the next crisis phase, political grandstanding.

In the end, there will be no major repercussions. There will be regulations, but nothing to significantly impact Facebook’s business or its two billion zombie users. And the stock will rebound just fine, at least to the extent that anyone can predict what a stock will do. There are several reasons for that.

First, Congress isn’t smart enough to understand how Facebook works, let alone figure out how to regulate it. When Zuckerberg explained that there will always be a free version, Sen. Orrin Hatch asked, “How do you sustain a business model in which users don’t pay for your service?”

After an awkward pause, Zuckerberg said, “Senator, we run ads,” and flashed a little smile so lifelike you’d swear he was learning to be human.

Judging by that deep level of understanding on the part of our lawmakers, trying to come up with a suitable regulatory structure would probably make their heads explode.

And don’t even think of characterizing Facebook as a monopoly, as some have suggested. Like it or not, users and advertisers willingly choose the social network. Facebook exerts nothing even remotely resembling monopoly power to constrain competition or harm consumers. It may knowingly addict its zombie users, but that’s another matter entirely.

Related: How Facebook Exploited a ‘Vulnerability In Human Psychology’

Second, users don’t want Facebook regulated. I mean, isn’t that what this is supposed to be about, protecting users’ privacy and data? The thing is, those settings have always been available. Users just don’t use them. Why? Because they don’t care who knows their friends, sees their selfies or reads their dumb posts. They just don’t.

Then there’s the question of motive. The usual idiots are saying that all Facebook and Zuckerberg care about are revenues and profits from ads. That’s complete fiction. When it comes to Zuck, you can pretty much take everything he says verbatim. He doesn’t have a duplicitous bone in his robot body. After all, it’s just code in there. And he’s not programmed to lie.

Don’t even get me started on the conspiracy wackos that think Facebook is politically biased. Trust me; that is fake news.

So when Zuckerberg says he was too idealistic about wanting to create a community where everyone can openly connect and share everything with each other, he means every word of it. If you think about it, his plan worked remarkably well for two billion users and investors that valued the company somewhere north of $500 billion. That is, until it didn’t.

Facebook failed to consider the dark side of how all that data could be used. And since users didn’t give a crap, neither did they. Now, having seen how all that worked out, Zuck realizes that it’s time to reassess that ideology and make some changes. It’s going to be a bit costly and take some time, but he’ll do it willingly. It’ll be a pain, but he’ll do it because he now has a new directive.

The code has been written. The program will be carried out. End of line.