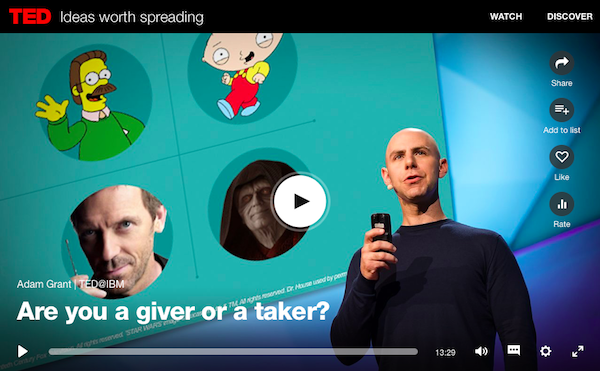 When you try to boil down complex concepts to the kind of motivational missives that the Twitterverse eats up, the sound-bites you come up with may sound compelling, but they’re usually misleading or just plain wrong. The problem is, people are bombarded with that sort of oversimplified bullshit 24×7.

Case in point, Wharton organizational psychologist and best-selling author Adam Grant. I first came across Grant via an article he wrote for The Atlantic called The Dark Side of Emotional Intelligence, a well thought-out and researched take-down of the overhyped fad.

But lately, Grant has reversed course, tweeting the sort of oversimplified nonsense I’m talking about. And while there’s always a thread of truth and good intention, most seem to promote the sort of popular dogma that can take lots of people in an entirely wrong direction.

The first tell was a tweet that, of all things, jumped on the emotional intelligence bandwagon:

To boost your emotional intelligence, use a broader vocabulary of emotion words. People who distinguish thrilled and inspired or aggravated and envious are more flexible in managing their emotions and less likely to retaliate aggressively against others. https://t.co/X1X6gHjUul

What happened to the questioning, challenging, critical thinking intellectual who wrote the “Dark Side” piece?

Then came a tweet cautioning how stories can be misleading, “A good story isn’t a substitute for data” along with the following cartoon:

Stories are key to compelling communication, but they can be misleading.

You can’t beat the irony; if stories can be misleading, what about sound-bites? Truth is, data can be just as misleading as stories; I see that all the time these days. More important, we rarely have data or research to back up gut instinct, smart strategy and breakthrough ideas.

ICYMI, Apple under Steve Jobs used no data, research or even focus groups in the development of the iPod, iPhone and iPad. And yes, Jobs was one hell-of-a storyteller. Now that’s what I call an important data point.

As for the graphic, any CMO who uses stories or data alone to pitch an executive staff or board is sort of missing the big picture … and so are they.

Then there was this tweet with the popular #MondayMotivation hashtag:

The evolution of self-esteem in a career:

The sooner you get to phase 3, the more success you achieve and the more impact you have.#MondayMotivation

Maybe this is true if you live in an academic bubble, but in the real world, phases two and three are reversed. You only become important after you do important work — and do it successfully — not before. It’s a critical distinction. Of course, Generation Me snowflakes just eat this stuff up.

On Sunday Grant tweeted “When you find evidence that doesn’t fit your narrative, include it anyway. Acknowledging complexity doesn’t make you less convincing— it makes you more credible. And it makes the other side more curious and open.”

You can sort of see where he’s coming from, but you don’t acknowledge the existence of contrary evidence because it makes you more credible, you acknowledge it because it’s evidence that your hypothesis might actually be wrong. That’s called critical thinking, the scientific method, all the things the good professor is supposed to stand for.

Frankly, that tweet was the most disappointing of all, and so ironic considering Grant works in academia – supposedly the bastion of science, research and data. It makes me wonder what happened to the man who wrote that thoughtful Atlantic piece. Lost in a murky sea of social media sound-bites.

And that was just a few tweets from one guy. Imagine how lost and confused people can get after years of posts from countless experts and leaders tweeting oversimplified popular nonsense.

In a recent post I quoted Harrison Ford agreeing that social networking is the downfall of our culture. When some of the smartest and most respected among us pump out this sort of ludicrous garbage daily, it’s hard to argue with the actor.