Posted by Steve Tobak on September 19, 2018 in No Comments 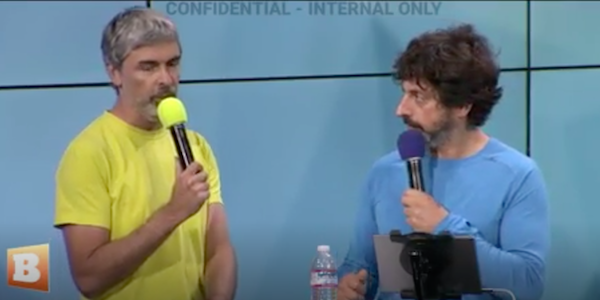 Video of a weekly all-hands meeting where Google’s top brass candidly discussed, ranted and occasionally cried about the “shocking” and “upsetting” 2016 presidential election results recently leaked. You can watch the whole video in all its gory progressive partisan glory here.

Now, I don’t really care who Alphabet (Google’s parent company) CEO Larry Page, president Sergey Brin, CFO Ruth Porat, Google CEO Sundar Pichai and the other leaders voted for. I don’t care if they lean left, right, up, down or diagonal. What concerns me is that their collective behavior pressures employees to conform and creates a hostile work environment.

I could not believe that the top executives of one of the world’s most powerful companies openly discussed partisan politics in an all-employee meeting. The fact that it was from the perspective of avid Hilary Clinton supporters who see the election of Donald Trump as an affront to their values and their company’s culture is immaterial. If the situation were reversed it would be just as concerning.

If anyone had even suggested discussing politics in a company event when I was a corporate officer I would have been appalled, and I would have shot it down. The problem is that the pressure to go along with their leaders and the majority or risk being ostracized or even retaliated against can be extremely stressful and overwhelming for those in the minority.

Think about it. If every senior executive in a company and the vast majority is an avid and open supporter of the same political party, that has got to create enormous stress and pressure to conform for employees who feel differently. That’s not just obvious from the standpoint of organizational behavior, it’s human nature.

Some of Google’s execs were sensitive to that. HR chief Eileen Naughton acknowledged hearing from conservative employees who are forced to keep their political views secret, presumably to avoid a discriminatory backlash, and conceded that diversity should also include political opinion. Well, duh.

The very assumption of political homogeny – that one party’s ideology aligns directly with the company’s values while the other’s is seen as a threat – in a company that claims to embrace diversity and inclusion in a democratic society, a nation built on liberty and freedom from religious and political persecution, is ludicrous on its face.

Brin made a show of how deeply offended he was of the election results. And yet, he somehow can’t get his arms around the possibility that many thousands of his employees might be offended by the way he views their beliefs and the notion that their political views are somehow inconsistent with their employer’s values.

An employee even questioned the problem with ideological bubbles, groupthink and confirmation bias, but Brin only took that to apply to those on the right, without even considering the possibility that such a thing might be at play right there in the room at that very moment.

The apparent lack of self-awareness, empathy and sense of fairness and corporate responsibility among Brin, Porat and the other leaders wasn’t just impressive, it was absolutely breathtaking, if not terrifying.

I’m also getting a little tired of the way political elites and business leaders categorize and generalize voters – especially the assumption that those who voted for Trump are xenophobic, misogynistic, tribal, fearful, angry, knuckle-dragging Neanderthals who are terrified of anyone who doesn’t look like them and think science is a superstition.

By the way, I have no idea if any of this has an impact on Google’s products or search results. That’s a whole different matter for another time.

The problem is that America was built on freedom from religious and ideological oppression. And yet, Google stands as a stark example of an American corporation where those on the right must keep their political views hidden for fear of persecution by an ideological echo chamber that comes straight from the top.

Even more problematic is that the situation within Google is reflective of Silicon Valley, the entire San Francisco Bay Area and many of America’s major metropolitan areas. Whichever way you lean, you should find that deeply concerning.